What shall we do with the drunken sailor?

On 3 July 1630 a meeting of East India Company Council members was held at Armagon, a trading post situated to the north of Madras.  The ‘consultation’ involving both Company merchants based ashore and officials from the ship Star had been called to discuss the case of Gyles Wadley.  Wadley had been granted leave to go ashore ‘to recreate himselfe in honest Civill manner’. Unfortunately he had become intoxicated and had entered houses, beaten and abused the people there, and set their bedding on fire. One of the houses attacked by Wadley belonged to one of the chief men of the town who informed the Governor.  The Governor ordered that Wadley be put in prison.  A servant from the English house at Armagon saw Wadley being led away and asked that he be handed into his custody to prevent him from doing any more mischief.  Wadley however had other ideas and ran away from the servant.  Later that night, Company merchants Christopher Read and Thomas Tempest went out to bring in some of their people who were absent from the house after the evening curfew.  They found Wadley asleep in the house of a Mestiso soldier and asked him to go to the English house with them, but he escaped as soon as he came out of the door. 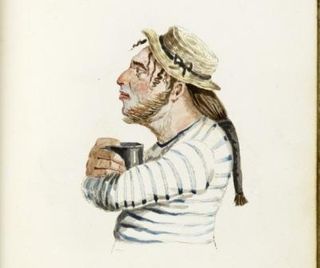 In the morning Company officials received a number of complaints about Wadley, including one from the Governor.  It was decided that Wadley should be ‘made fast’ in some convenient place in the Company’s house and there receive 50 lashes upon his bare back for his offence.  He was also ordered to pay for any damage.  This punishment was intended to deter other Englishmen from acting in a like manner.  Fresh regulations were also issued for the better government of the men in the Star: those with shore leave in future ‘shall not dare to lodge out of the Companies howse, or to be forth, after the ringing of the Bell’ on penalty of receiving 50 blows ‘well laid on, uppon their buttocks, with the stocke of a musket’.

This story is just one of the misdemeanours involving men sailing in the Star which are recounted in a volume of the East India Company’s marine records (IOR/L/MAR/C/4).  Other wrongdoers were disciplined for bad language and indiscipline; quarrelling and fighting; theft; and playing cards when supposed to be manning the watch.

Posted by Margaret.Makepeace at 07:00:00 in Conflict , Crime , Journeys , Leisure