We left Robert Makepeace in 1852 performing his feats of pedestrianism in Australia.

In the same year in India another athlete styling himself 'The American Stag' set out to walk 1,000 miles in 1,000 hours.  William England (b.1804 in Maryland), who had been the chief officer of the American ship Cambridge, was by no means the first man to attempt this challenge. 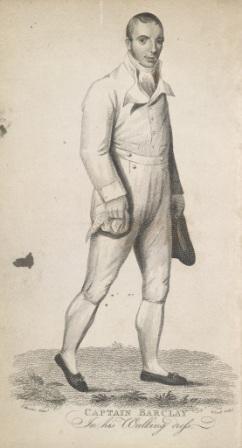 From Walter Thom, Pedestrianism (1813)  © The British Library Board Images Online

Robert Barclay Allardyce, a Scottish aristocrat better known as ‘Captain Barclay’, had become a legend in 1809 when he bet 1,000 guineas that he could walk one mile in each of 1,000 consecutive hours.  Once an hour, he walked across Newmarket Heath to a post half a mile away and then back again. Barclay increased the amount of time which he could rest by walking a mile at the end of the first hour and then starting out on the next mile as soon as the next hour began. Towards the end of his walk he had to be kept awake by being prodded with needles and having pistols fired close to his ears. On his successful completion of the event on 12 July 1809 Barclay was 32lbs lighter but 16,000 guineas richer because of side bets on top of the original wager.

William England walked for 1,000 miles on the road between Calcutta and Barrackpore from 8 March to 19 April 1852 for a wager of 5,000 rupees. The temperature was above 90 degrees for the last fifteen days and he lost one sixth of his body weight. The local people were bewildered.  Allen’s Indian Mail reported that they were ‘utterly unable to account for the spectacle of a European, walking up and down for a month together in the same place. The most popular view of the case was, that the “Saheb” had turned Sunyasee, and bound himself by a vow to walk a stated distance up and down at certain intervals, till he died’.

The 200th anniversary of Barclay’s walk in 2009 was marked by jockey Richard Dunwoody’s recreation of the feat at Newmarket to raise money for charity.