Dennis Higton, who died earlier this year at the age of 90, was a British aeronautical engineer who played a little known, but important part in the testing of Britain's first jet aircraft in 1942 and 1943.
Dennis grew up in difficult circumstances and with limited prospects in the hungry years of the 1920s and 1930s depression, until a position as an engineering apprentice at the Royal Aircraft Establishment (RAE), Farnborough offered him a rare opportunity. As Dennis recalled for his interview for National Life Stories An Oral History of British Science, “I can’t tell you the resolve that I put upon myself not to cheat, not to slack, to become absurdly diligent because I wouldn’t have another chance.” His practical skills and hard work at night-school won him a position in the Aerodynamics Department when he completed his apprenticeship. As a practical engineer, without a university education, Dennis faced a daunting challenge joining a group that included some of the nation's finest theoretical aerodynamicists and mathematicians.

Dennis Higton being The Boy at RAE

However, this very difference from those around him helped make Dennis an invaluable member of the team. His start as an apprentice meant that he could bridge the divide, social and educational, between technical workshop staff and aeronautical scientists, and his ingenuity as a practical engineer would prove invaluable to more theoretically inclined colleagues.

In the 1940s and 1950s Farnborough was heavily involved in trying to understand the behaviour of aircraft flying at high speed. With wind tunnels unable to function accurately at speeds approaching the speed of sound, much of this work had to be based on data collected 'live' by instruments fitted to aircraft which were then recorded as the planes flew high speed test flights. Not only were the test flights dangerous, but the primitive nature of the instruments available and the tiny spaces on aircraft to fit the equipment created great problems for measuring flight data. Faced with these problems, Dennis devised a range of ingenious instrumentation installations for recording data from aircraft in flight, including the instruments for the first official flight test programme of Britain's very first jet aircraft, the Gloster E.28/39 powered by Frank Whittle's newly developed jet engine. These instruments provided invaluable data for other aeronautical engineers of a more theoretical bent to base their calculations on.

We may hear about “great British inventions” like the jet engine, carbon fibre, or the modern computer, but how many of us could name more than one or two of those who helped to create them? As Dennis' story reveals, behind every scientist you've heard of, and every item of engineering you use, are an army of hidden individuals, making small but vital contributions as part of a wider team effort. 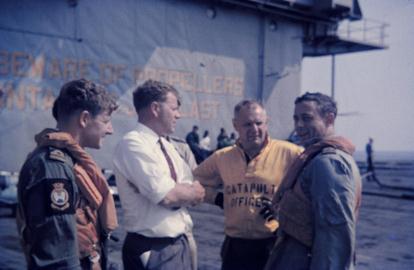 Posted by Margaret.Makepeace at 07:00:00 in Innovation , Science and environment , Work