A Phantom Burglar and the Hulk

For Hallowe'en, a Phantom tale, but perhaps not what you might expect…

On 15 April 1826 the Northampton Mercury reported that Henry Phantom, aged 15, John Andrews, 15, and William Andrews, 14, had been sentenced to death at the Warwick Lent Assizes. The three boys were convicted of ‘burglariously entering’ the workshops and warehouse of William Rostill in Birmingham and stealing ten boxes.  Rostill was a dealer in tortoise and turtle shell and ivory boxes.

Happily the boys were spared the noose and their sentence was commuted to transportation for life.  Before leaving England they spent a year on board the prison hulks Justitia, Retribution, and Euryalus moored at Woolwich, Sheerness and Chatham. 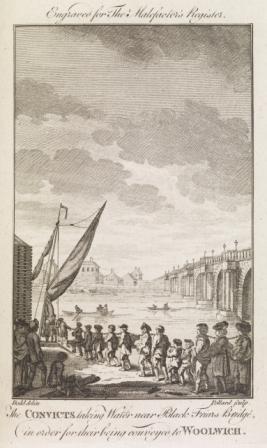 Convicts making their way near Blackfriars Bridge in order to be conveyed to Woolwich. Image taken from The Malefactor's Register; or, the Newgate and Tyburn calendar, 1779. © The British Library Board Images Online

Henry Phantom lived for four months on Euryalus, a decommissioned Royal Navy ship at Chatham specially fitted for juvenile convicts in 1825.  Over 400 boys were packed into the ship ranging in age between 8 and 17. The chaplain Thomas Price lamented his charges’ lack of moral and social restraint. He reported that his efforts to combat their 'depravity' were hampered by the lack of a system of separating boys into different categories to assist with discipline. With such levels of overcrowding, disease spread quickly: scurvy and ophthalmia were two common complaints. The boys were employed in making clothing for the convict establishment and were not allowed to make any noise. Two hours’ exercise was allowed daily. On Saturdays the boys were washed all over with tepid water and soap. Relatives were allowed to visit under supervision, and escapes were rare.

In March 1827, Henry Phantom, John Andrews, and William Andrews set sail on the Guildford with 187 other convicts to start life in New South Wales. But that is another story!


Further reading
British Newspaper Archive
Parliamentary Papers – regular reports on convict hulks printed by the House of Commons; 1835 First Report from the Select Committee of the House of Lords appointed to inquire into the present state of the several gaols and houses of correction in England and Wales.

Posted by Margaret.Makepeace at 07:00:00 in Crime , Journeys