As the Metropolitan Railway celebrates its 150th anniversary, we’d like to draw our readers’ attention to some less well-known papers in the India Office Records which concern the development of the London rail network. 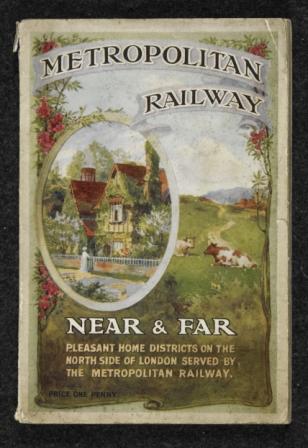 Cover of Near and far : pleasant home districts on the north side of London served by the Metropolitan Railway (1912) Images Online

In 1874 the India Office received notice that the proposed Hounslow and Metropolitan Railway was to run through the grounds of the Royal Indian Asylum at Ealing.  The Elm Grove estate in Ealing had been purchased by the Secretary of State for India from the Perceval family for £24,500 in March 1870. Sir Matthew Digby Wyatt supervised the conversion of the house into a lunatic asylum for patients who had been sent home from India. The Royal Indian Asylum opened in August 1870.

Clause 32 of an Act passed in 1878 for the building of the Hounslow and Metropolitan Railway was intended to protect the interests of the Royal Indian Asylum:
•    no more than two acres of land was to be acquired compulsorily without the consent of the Secretary of State
•    the railway was to pass through the grounds of the Asylum in a cutting
•    a bridge and road over the cutting were to be constructed and maintained
•    the railway was to be fenced off from the Asylum grounds.

Negotiations between the India Office and the railway company before conveyance of the land in 1881 centred on the amount of compensation to be paid for the land, the positioning of the bridge, and the fencing.  Dr Thomas Christie, the Superintendent of the Asylum, was consulted about the protection to be given to patients passing across the bridge. It was agreed that a properly constructed iron railing would be sufficient and that it would look better than the high brick wall shown in the drawing submitted by the railway company.  Christie believed that patients were less likely to climb an open railing than a wall beyond which they could not see without getting to the top. The only horizontal railing bars should be at the top and bottom – intermediate bars would ‘give facilities for climbing’.

Further reading:
For papers, correspondence, plans and drawings about the Hounslow and Metropolitan Railway scheme at Ealing Search our Catalogues Archives and Manuscripts
IOR/L/SUR Papers of the India Office Surveyor’s Department
IOR/L/L/2 India Office Property Records
Anthony Farrington, The records of the East India College Haileybury and other institutions (London 1976)

Posted by Margaret.Makepeace at 12:36:55 in Innovation , Journeys , Science and environment

Posted by Margaret.Makepeace at 12:36 PM