Today is the 200th anniversary of the birth of John Snow, the pioneer anaesthetist and epidemiologist who demonstrated that cholera was spread by infected water rather than being airborne. To mark this, we are going to post a series of stories relating to cholera. We start with a cholera outbreak in Soho and the effect on the bookbinding community there. 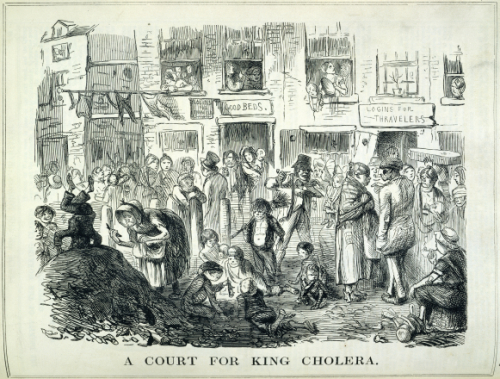 Bookbinders in Victorian London often worked in particular neighbourhoods.  One such was present day Soho.  Poland Street, Broad (now Broadwick) Street and Noel Street contained at least twenty three workshops. Binders and their families and apprentices lived above the business, and any spare rooms were rented out to lodgers. Other employees worked on the premises for six days a week. Crowding was the norm, conditions were insanitary, and water came from communal outdoor pumps.  Disease was rife.  September 1854 saw a virulent outbreak of cholera. 127 people living in or around Broad Street died in three days.  The Bookbinders’ Trade Circular noted that Wickwar & Co of Poland Street lost four people to the disease and Wright of Noel Street, six.

Local physician and early epidemiologist, John Snow, investigated the cause of the cholera by gathering reports of the circumstances of the fatalities:

[William Wickwar] was sent for from Brighton to see his brother [John Wickwar] at 6 Poland Street, who was attacked with cholera and died in twelve hours, on 1st September. The gentleman arrived after his brother's death, and did not see the body. He only stayed about twenty minutes in the house, where he took a hasty and scanty luncheon of rumpsteak, taking with it a small tumbler of brandy and water, the water being from Broad street pump. He went to Pentonville, and was attacked with cholera on the evening of the following day, 2nd September, and died the next evening.

Analysis of these incidents led Snow to an important discovery; cholera was not air borne but transmitted by water, and the epicentre of this outbreak was an infected supply in Broad Street. The pump there was eventually shut down and measures were taken, albeit slowly, to eliminate the conditions in which the disease could thrive. 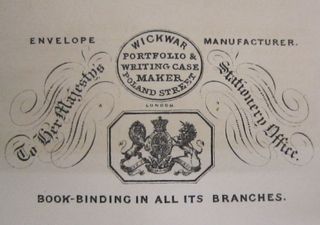 Despite the loss of these experienced craftsmen and women, items in the British Library’s John Jaffray Collection indicate that the Wickwar and Wright businesses survived, as did the wider bookbinding trade in Soho, ultimately thanks to the enquiring mind and perseverance of their neighbour, John Snow.

Posted by Margaret.Makepeace at 00:15:00 in Arts and crafts , Domestic life , Health , Science and environment , Work

Thanks for this feedback!
Have you seen the other references to the Wickwars in the Jaffray Collection?
The catalogue is available on the British Library website.

Very interesting to see the shop advertisement as
I have been researching this family and hadn't seen it before.
Many thanks.