The devastation wrought by cholera seized my imagination as a child when I read how the disease wiped out the family and Indian servants of Mary Lennox, the heroine of The Secret Garden. Not surprisingly, the causes of cholera, its prevention and cure were of acute interest to British officials in India responsible for military and public health. Their voluminous reports such as the History of Cholera in India from 1862 to 1881 record the incidence of the disease, mortality statistics and factors such as the weather and the availability of food, in an attempt to understand the epidemiology. My eye was caught by the discussion of the kumbh mela (twelve-yearly festival) in Hardwar, a site of Hindu pilgrimage in the Punjab, in 1867. 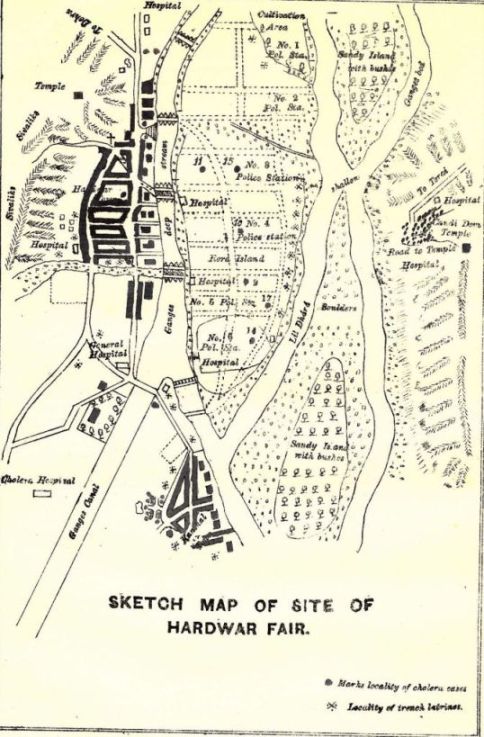 The sanitary conditions of the pilgrim camps were ‘said to have presented a marked contrast to any previous gatherings which had ever been held at Hardwar. The encampment was singularly clean, and the arrangements for the disposal of all filth were actively and successfully carried out.’ Until 13 April, the 3 million pilgrims were in good health, but between 13 and 15 April, there were 19 cases of cholera. It was thought that there was ‘good reason to believe that, had the pilgrims continued at Hardwar for even a few days longer, the mortality among them would have been even greater than it unhappily was.’

Conditions were quite harsh as Hardwar is hot by day but cold by night in early spring. In 1867, there was a fierce thunderstorm on 11 April, and it continued to rain on 12 April, the great bathing day. ‘A vast number [of pilgrims] must have waited in a state of fatigue for twenty-four hours till the sun came ere they could get any dry clothes on their bodies.’ From 12 April, the pilgrims began to disperse. Many contracted cholera en route or when they reached home. ‘In a large number of places, these way-worn and weather-beaten people were the first to succumb before the prevailing epidemic, and this circumstance gave rise to a general belief that they were the direct cause of the widespread diffusion and violent prevalence of the disease.’ The author of the History reserved judgement on the matter, but did concede that ‘returning pilgrims very largely made up the total cholera mortality of the year in the Province’. 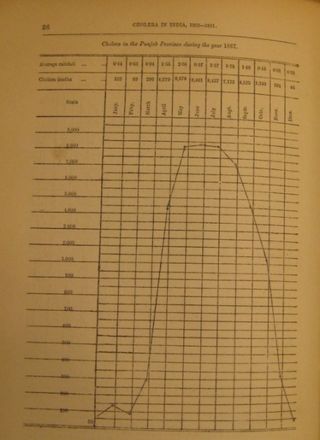 Graph showing a steep rise in cholera cases from April

The History refers to the Sanitary Administration Report for the Punjab, 1867, whose author was bemused by the cholera outbreak, wondering if it had spread too widely and suddenly for it to be caused by ‘contagion’ which ‘extends itself gradually’. He quoted Dr Murray, Inspector-General of Hospitals, Upper Provinces, who suggested  that ‘the simultaneous appearance of cholera in every section of the pilgrims was due to atmospheric cause, rather than dissemination from any individual source’.  Apparently Dr Murray had attributed several instances of cholera to ‘unseasonable showers’ such as those experienced at Hardwar. Perhaps the findings of John Snow during the 1854 cholera outbreak in London had not yet gained total acceptance among British public health officials in India.

Further reading
IOR/V/27/853/13, History of Cholera in India from 1862 to 1881 with General Statistical Summary and Deductions Drawn Therefrom. Prepared for the Special Committee on Cholera of 1881, by Deputy Surgeon General H.W. Bellew, Sanitary Commissioner, Punjab
Richard Axelby and Savithri Preetha Nair, Science and the Changing Environment in India 1780-1920: a Guide to Sources in the India Office Records (The British Library, 2010) Available from the Online Shop
Search our Catalogue Archives and Manuscripts

Posted by Penny Brook at 06:00:00 in Health , Journeys , Religion , Science and environment