A recent readers’ event at the BL focussed on how the India Office Records are being used by researchers from East India Company at Home 1757-1857, Making Britain 1870-1950, and Beyond the Frame - Indian British Connections. These projects look that the impact that India has had on Britain and have uncovered the kinds of records that are the lifeblood of this blog.

The session was chaired by Professor Susheila Nasta of The Open University. Dr Kate Smith explained how East India Company at Home is rethinking the British country house in its imperial and global aspects.  Company officials and their families are being tracked on their return to the UK. Asian furniture, furnishings and ornaments in their homes were seen by visitors as well as by family and servants – what did these objects mean to the British, and was their placement in a particular part of the house significant?

The human aspect is an important thread in research for the project. Kate gave examples from two rich sources of family papers found in the India Office Private Papers. Letters reveal how difficult a decision it was for Lord Amherst  to accept the post of Governor General in 1822. Lady Amherst’s diary of her journey to India compares places visited on the voyage to those she had left behind in England. The Walsh letters show the movement of family members back and forth between Asia and Britain, and give voice to the pining for UK country houses which gave a sense of belonging whilst living thousands of miles away. 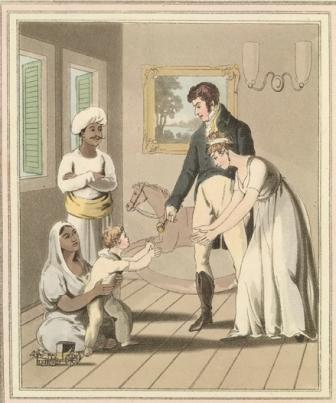 European lady and her family, attended by an ayah. From The costume and customs of modern India (London, c.1824) Images Online

Dr Florian Stadtler, a guest blogger for Untold Lives, talked about Making Britain and Beyond the Frame. These interlinked projects highlight the contribution made by South Asians to key events in British history and the impact they made on British culture.  A wide variety of individuals is featured:  lascar seamen; the first Asian MPs; ayahs; suffragette Princess Sophia Duleep Singh; Krishna Menon and the India League. Florian picked out the Public and Judicial Department record series (IOR/L/PJ) as being particularly useful for his research.

Florian then explained how he had managed to uncover at the BL previously overlooked information about the role of Indian soldiers in the First and Second World Wars - photographs, official documents, private letters. Making Britain and Beyond the Frame aim to break the silence on subjects like this, providing databases and digitised records to encourage people to go to look at the archives themselves.

Susheila commented that archives are a fantastic source for story-telling and that novelists should take note of this.  We hope that the Untold Lives blog can play a part in opening up the India Office Records to a wider public.  By sharing stories we have found, we aim to lure people to the BL to make their own discoveries with the help of expert and friendly staff!

If you have questions about the India Office Records, please email ior@bl.uk.

Posted by Margaret.Makepeace at 10:35:39 in Domestic life , Journeys , War

Posted by Margaret.Makepeace at 10:35 AM