After writing about Iwan Bazylewski, Bronislaw Boguszewicz and Tatiana Czynnowa in earlier posts on Untold Lives, I came by chance across documents relating to ‘Aliens’ containing lists of names from various internment camps including Dehra Dun, Satara, and Purandhar. Here is what I have discovered…

Iwan Bazylewski spent seven years interned at Dehra Dun He was treated as a serious threat as he had a history of anti-Soviet political activities and had spent few years in a concentration camp. In 1942 Bazylewski decided to join the communist Red Army to fight against Germany but was turned down by the Soviet military attaché. 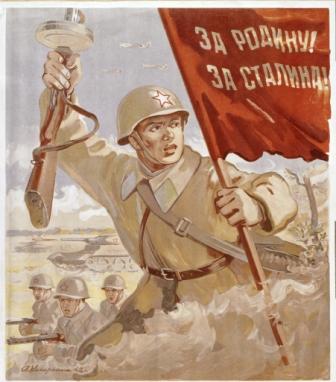 Image of soldier from Soviet poster: "For the fatherland, For Stalin...".  ©Lessing Archive/British Library Board Images Online

The Government of India decided to release Bazylewski if he could find a job. In October 1944, he was found unsuitable for employment under the military authorities. He was still trying to secure work in 1946. The Russians applied to the India Office for his repatriation, but he could not be forced to go back as he was not subject to the Yalta Agreement. An attempt to push him over to the International Refugees Organisation failed and Bazylewski arrived in the UK on S.S. Strathmore on 3 November 1947.  Robert Niven Gilchrist from the India Office was not happy about the outcome, but he could at least pass the case onto the Home Office.  Neither the Russians nor Poles wanted to take poor Bazylewski and after pushing him between the Northland House in Southampton, the National Service Hostel in Hyde Park, and Brixton Prison, he was finally placed in employment in the summer of 1948.

Bronislaw Boguszewicz was initially released in 1941, but he also found himself in Dehra Dun’s internment camp ‘because he was unfriendly to the Polish authorities’. Boguszewicz did not wish to return to Poland.  He appears on a number of lists of internees and is mentioned in the documents relating to the ‘removal of aliens’ after the World War II. Boguszewicz was passed onto the International Refugee Organisation for resettlement, but was excluded from repatriation. The India Office files do not give any details of his whereabouts after the war, but I have come across a website of a Polish film consultant, who worked on The Way Back. The film was based on Slavomir Rawicz’s book The Long Walk which claimed to tell the true story of an escape from the Soviet Union to India. Apparently Boguszewicz recognised some characters in the book although it certainly was not his story as he escaped through Persia, not the Himalayas. Perhaps he met some of the people in the camps?

Tatiana Czynnowa is my favourite adventurer, full of life and imagination, a tough woman fearing nothing and risking everything. She too ended up in the internment camp and was then was placed in the parole centre in Purandhar. She claimed to be a nurse, born in ‘Kaftan Tatar’.  She was subsequently moved to Satara. She gave birth to a baby girl in 1942 and evidence suggests that they were both released in October 1943. Here the trail ends and at present her subsequent story remains untold.  Can you complete it for us?

Not yet! Dorota did a lot of delving in the India Office Records and everything she found has been published on the blog. Maybe there is related material at The National Archives to be uncovered?