Let me tell you a story…

A resource for researchers in modern South Asian history which is perhaps under-utilised is our collection of oral history interviews with people recounting their memories of the region. We have more than 200 in all, including those from the BBC series 'Plain Tales from the Raj'.

My own contribution to the development of this collection is at one remove. Within 18 months of my joining what was then known as the India Office Library and Records, not only had I met three persons with personal experience of life in the latter days of the Raj, I had also succeeded in persuading them to record their reminiscences for posterity.

I remember meeting Frank Willcocks in the summer of 1988 during a Historical Association conference in Plymouth in Devon to mark the 400th anniversary of the defeat of the Spanish Armada. For him it was an opportunity to return to the city of his birth. His connection with India had come in the years just after the end of the Second World War, when he had been posted to the East for his national service with the Royal Air Force. Curiously, one lasting effect of the two years he spent outside the U.K. was a lifelong interest in amateur dramatics, a pastime into which he had thrown himself with gusto in an effort to relieve the tedium of life on station. One particular anecdote I recall him telling me was the occasion sometime in the spring of 1947 when he found himself performing in an up-country location in front of an all-male audience, most of whose members had not laid eyes on a European woman for several months. Almost inevitably this meant that when the first female member of the cast went on stage she was greeted with a huge testosterone-fuelled roar; the poor girl dried immediately and the production came to a grinding halt! I hope this made it on to the tape of the interview! 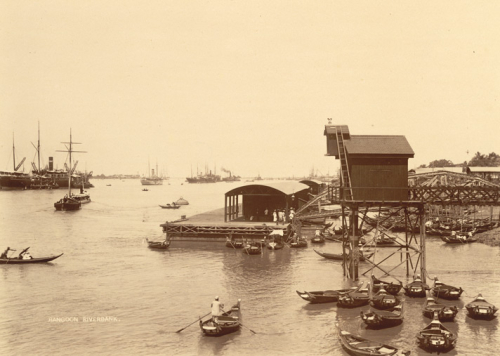 The other interviewee I remember was Geraldine Wright, a delightful Anglo-Burmese lady I had the pleasure of meeting during a holiday in Worcestershire in the late 1980s. Her story was a much more serious one. Born and brought up in Rangoon, she and her family had had to leave the country hurriedly early in 1942 to escape the invading Japanese army. During the doubtless frightening journey overland to the relative safety of Chittagong in Bengal in India she had been bitten by a stray dog, and consequently at the tender age of nine had endured a series of horrendous injections through the stomach wall to ensure that she did not contract rabies. The story did end happily in that she, her parents and brother all managed to escape unscathed, and indeed the tape concludes with her memories of the return visit she made to Rangoon in 1977 and her noting what had and had not changed since she was last there.

The interviews with Frank Willcocks and Geraldine Blanche Wright can be found via the Sound & Moving Image Catalogue.