The First of May – Chimney Sweeps’ Day 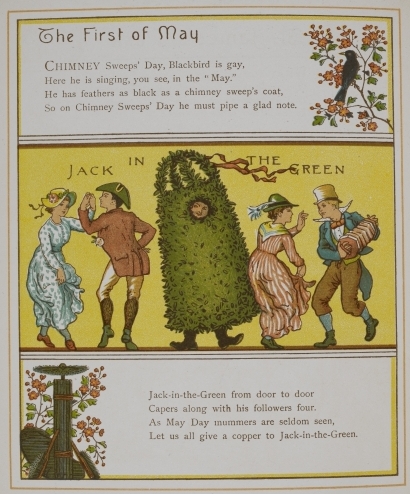 May Day used to be celebrated as a festival by chimney sweeps. Newspapers reported the carnival proceedings: ‘the ludicrous caperings of the sooty tribe, who fantastically attire themselves on such occasions, with their faces smeared with brick-dust, by way of paint, and with gilt and coloured paper ornaments in profusion’ (Sussex Advertiser 14 May 1827).  For some years before her death in 1800, Mrs Elizabeth Montague entertained sweeps every May Day in the courtyard of her house in Portman Square in the west end of London. Roast beef and plum pudding were served, followed by merry dancing.  Each guest was handed a shilling by the lady of the house as he left (Alnwick Mercury 6 May 1876).

In trying to help the sweeps, Elizabeth Montague was following the example of philanthropist Jonas Hanway who campaigned in the second half of the 18th century to improve the unhealthy and dangerous working conditions for climbing boys apprenticed to chimney sweeps. An act of kindness towards the boys which was reported in the press involved three maritime officers of the East India Company in 1776. When walking through Smithfield, the men spotted a group of little sweeps loitering hungrily near a ‘sausage parlour’.  They told ‘the little Sons of the Brush’ that they would buy them sausages until they tired of eating.  Two cooks were needed to keep up with the boys’ appetite.  After eating sausages and black puddings for over a half an hour, they were treated to 24 plum and apple tarts.  The officers settled the bills and received ‘a First of May Day Bow from the Chimney-Sweepers, and a low Curtesy from each of the Cooks’ (Derby Mercury 6 September 1776).

Journalists delighted in mimicking the language and accent of the London chimney sweeps. After street cries were regulated by the 1834 Chimney Sweepers Act, there were newspaper reports of sweeps being punished for calling out ‘Sveep’. One expressed his astonishment at the new regulation: ‘Vell, I never… I vunder vot next ve shall have. Carn’t even now call out “serveep” for van’s livelywood but vot the beak is arter us and nails us for five bob, or a month in kervod’ (Morning Post 21 November 1834). 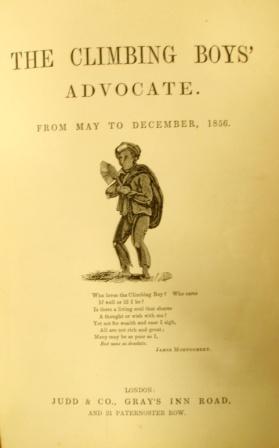 Improvement in the working conditions of climbing boys was a slow process to judge from the evidence presented by The Climbing Boy’s Advocate published in 1856. This verse by James Montgomery appears on the front page:

Who loves the Climbing Boy?  Who cares
If well or ill I be?
Is there a living soul that shares
A thought or wish with me?
Yet not for wealth and ease I sigh,
All are not rich and great;
Many may be as poor as I,
But none so desolate.