In January 1864, a large Agricultural Exhibition was held at Calcutta sponsored by the Government of Bengal. A relatively novel event, the aims of the Central Organising Committee were to bring together for comparison and competition from every part of India specimens of local productions.

When the Exhibition opened the contributions on show were arranged into three classes: ive stock, machinery and implements,and produce. Some of the contributors did suffer from confusion as to what was required for exhibition, with some believing that anything strange or unusual was what was wanted. The Central Committee noted in its report of the sheep submitted to them that “Hairy creatures with enormous horns were of frequent occurrence. One ram was said to have maintained a combat with a tiger”, and in another instance a woman brought a small black kid of the ordinary Bengali breed, born with three legs instead of four! Despite such minor problems the exhibition was considered to have been a great success, with an estimated 70,000 people visiting it.

The success of the Exhibition led quickly to local agricultural exhibitions being held throughout Bengal and Bihar Orissa in 1864/65. Copies of the reports on the various exhibitions submitted to Central Government by local officials can be found in the India Office Records. The reports give a wealth of detail about the organisation of the exhibitions, and the people who took part, with the mix of European and Native Indian participants being reflected in the prize lists of the various competitions. 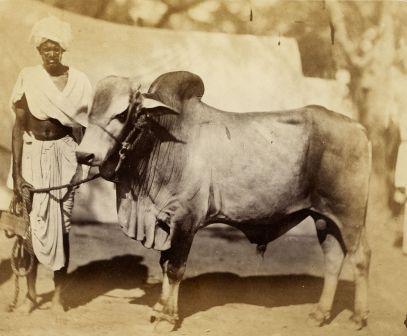 Livestock was often the star of the agricultural shows. The judges at Dacca reported that the standard of bulls and cows was very good, with Khajeh Abdool Gunny taking a first prize for his half-English, half-country cow, and a Mr Thomas taking first prize of 50 rupees for best bull in the Division. The Dacca Exhibition gave prizes for a wide range of manufactures, including to Gobind Chunder Dutt for “a kind of violin”, and to S A Stewart for his revolving photographic camera. Ameeroollah of Sylhet was awarded a prize of 20 rupees for a case of insects he had collected, it being judged that every encouragement should be given to the study of natural history. Special prizes were also awarded at the Dacca Exhibition. The inventive Gobind Chunder Dutt was awarded a prize of 16 rupees for a specimen of new fibre, while Syud Abdool Mujeed was awarded a prize of 4 rupees for scented tobacco. Institutions as well as individual could exhibit goods. The Dacca Girls School won 2nd prize for woollen articles, with the Dacca Jail taking prizes for fibrous manufacture and paper. Other Shows awarded prizes for flowers and vegetables. At the Burdwan Show, the Maharajah of Burdwan won first prize for geraniums and second prize for roses. For vegetables, Hurro Mohun Mookerjee of Hooghly won 30 rupees as first prize for white sugarcane, while Mrs Atkinson of Burdwan won a first prize of 15 rupees for chillies, and Sharoda Prosad Roy won 5 rupees for cabbages.

Sources:
Report of the Central Committee on the results of the Bengal Agricultural Exhibition of 1864 [IOR/L/PJ/3/1092 No.81]

Reports and correspondence regarding the Agricultural Exhibitions held in Bengal, December 1864 - February 1865 [IOR/L/PJ/3/1095 No.11]

Posted by Margaret.Makepeace at 00:15:00 in Arts and crafts , Domestic life , Innovation , Science and environment