Children in the corridors of power

It is 1825.  Imagine you are walking down Leadenhall Street in the City of London.  Before you stands the magnificent East India House. 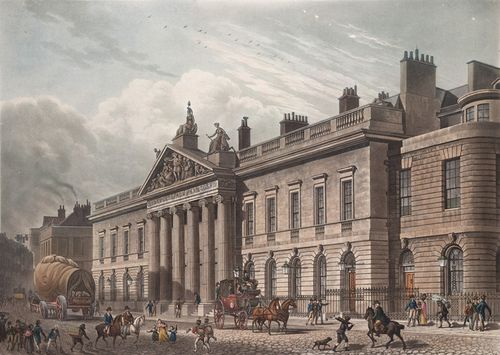 
You go through the main entrance. This is the bustling headquarters of the East India Company, a hub of commercial and imperial power. Civil, military and naval personnel mingle as they go about their business.  There is a noisy auction taking place in the sale room, with bidders keen to buy tea, textiles, spices or drugs shipped by the Company from Asia. But if you listen very carefully you might hear the sound of a baby crying somewhere in the building and the voices of children playing.

The Company’s housekeeper Elizabeth Hall Tarrant and one of her assistants Lucy Imeson lived in East India House with their families.  Elizabeth Tarrant (née Daycock) was appointed in 1814 with a yearly salary of £100, and Lucy Imeson (née Clayton)  joined her in 1817 on wages of £50 a year.  Both women were provided with accommodation, coals, candles, tea, bread and butter which were valued at another £50 a year.

The Imeson family lived in two rooms.  George Imeson joined the Company warehouses as a labourer in March 1818.  He was later promoted to commodore (foreman).  Four children were born while the couple were living at East India House: William Edwin in September 1818; Lucy in November 1820 (she died in March 1822); George in May 1822; and Lucy Elizabeth in July 1825.

George Imeson died in August 1830 aged only 38. Lucy received £10 10s as death benefit from the Company labourers’ welfare fund.  She stayed on as assistant housekeeper until June 1834 when the Court of Directors decided to stop providing breakfasts in the tea rooms and to reduce the housekeeper’s establishment from four women to two.  Lucy retired at Midsummer on an annual pension of £50.

In October 1840 Lucy Imeson petitioned the Company for assistance, stating that she was a widow with her family partly dependent on her, the eldest being at present without a situation. She asked the Company to give her an advance of £20 from her pension to be repaid in quarterly instalments of £5 to enable her to set her son up in business and allow him to try to support himself.  Her request was refused.

Our next story will be about the Tarrant family.

From Bob Milburn - Lucy and George Imeson had four children; William Edwin, Lucy, George and Lucy Elizabeth. William would have been 22 when she asked for financial assistance for him. He seems to have survived the rebuttal as the census records show him to have developed as a businessman via groceries and agricultural machinery into the owner of a property portfolio. He is finally recorded in 1891 living close to Crystal Palace in Streatham, a fashionable area of London in that period. Lucy appears to have died in childhood at about 14 months. Lucy Elizabeth grew up and married William Tanner Raine. They are both recorded as school teachers in 1861.
Whilst researching the Imesons in the church records I accidentally found records to other families, on the same pages, who are recorded as living in East India House. Joseph and Elizabeth Frances Dart are recorded with eight children between1817 and 1827; Joseph Henry, Elizabeth Mary, Frederick, Frances Maria, Philip Francis, Ellen, Mary Harriet and Charles Lewis. I believe that Joseph Dart was the Secretary to the East India Company. Joseph Henry went to Exeter College, Oxford and after graduation became a Barrister of Lincoln’s Inn. He had a successful career in Law and became a Verderer of the New Forest.
Peter and Mary Jane Auber had a daughter Mary Jane in 1823. I suspect that Peter Auber was another Secretary to the East India Company.
Finally William and Charlotte Pixley had a son Stewart in 1824. William Pixley is recorded as a Captain in Trinity House in 1861. He is also recorded as an Elder Brother of Trinity House, a significant Merchant Marine Appointment. His reason for Living in East India House is as yet unknown.
This would suggest that there could have been up to 14 children in East India House during the 1820’s. There may be more - I have not yet followed up these discoveries.