The Tarrant family had a number of connections to the East India Company.  James Tarrant was butler to Company Secretary James Cobb before being nominated for a labourer post in the Company London warehouses in 1811.  When his wife Elizabeth was appointed housekeeper to the Company in 1814, Tarrant and their baby son James moved with her into East India House.  Elizabeth’s brother John Daycock already worked there as a clerk in the Secretary’s Department.

One of the duties for Elizabeth Tarrant and her team of assistants was to provide breakfasts for the staff at East India House.  There is a book of weekly accounts signed by Elizabeth showing the number of meals served and the food stuffs purchased. 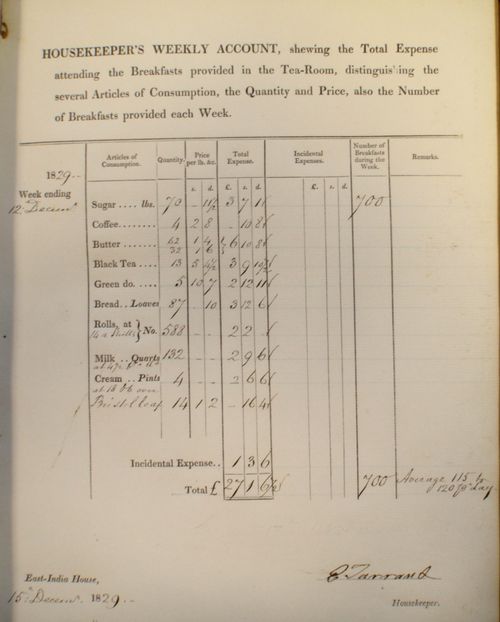 However the Tarrants did not live together peaceably and their ‘domestic differences and little broils’ eventually forced the Company’s senior officials to intervene.  John Daycock was sent to fetch the Company warehouse surgeon who questioned James Tarrrant and pronounced him insane.  Elizabeth ‘readily’ signed a certificate and three Company officials forced James into a coach which took him to Dr Warburton’s asylum at Bethnal Green.  He was detained there for three months. 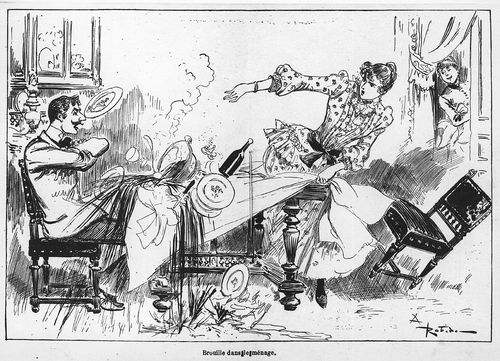 In 1818 James was re-admitted as a warehouse labourer but suspended for insolence in 1820.  The Company dismissed him in 1826 when he spent time in prison ‘for breaking the peace in his own family’.   James asked to have his job back in 1828 but he behaved violently at East India House and was banned from future employment with the Company.  In 1832 he petitioned in vain to be granted a pension.

After Elizabeth had retired in 1834 on an annual pension of £75, James started to submit more petitions to the Company.  He complained that he had ‘a very bad Wife, who has sent me a Bill of Pay for her Appartments, and not complying with her extravagance my Goods was Seized and taken away Novr 1835 and her habits is so contrary to mine being given to dram drinking &c &c’.  He said he was unemployed and in extreme poverty: he had been given small sums of money by Company officials and their wives.  James submitted a solicitor’s letter claiming that the whole of Elizabeth’s pension should by law be paid to her husband.  The Company directors refused to pay Elizabeth's pension to James, a decision which appears very enlightened given that the Married Women’s Property Act was not passed until 1870.  When John Daycock made his will in 1849, he specified that the bequests to his sister Elizabeth and other female beneficiaries were to be for ‘their respective sole and separate use and benefit’ and not to be subject to the control of their husbands.

After leaving East India House, Elizabeth lived with her unmarried son James who had continued the family tradition by working for the East India Company as a messenger.