In 1840, Lord Auckland, Governor General of India, asked for reports upon the condition and management of the four Insane Hospitals in the Bengal Presidency at Russapaglah in the 24 Parganas, Murshidabad, Dacca, and Patna. A circular letter was issued asking for information, for example, on the number of patients, the construction, organisation and management of the hospitals, the methods employed for the amusement and occupation of the patients, and the rates of cures and mortality.

The reports submitted give a wealth of detail on the condition of the hospitals and the treatment of the patients. In his report on the Russa Hospital, dated 16th January 1841, F P Strong, Civil Surgeon of the 24 Parganas, included details of the botanical activities being employed as a method for treating and helping patients suffering from mental illness by providing employment and amusements. The idea being that working in the garden provided for the patients “exercise and mental change, with a view to their forgetting or in some manner losing sight of their unfortunate condition”. 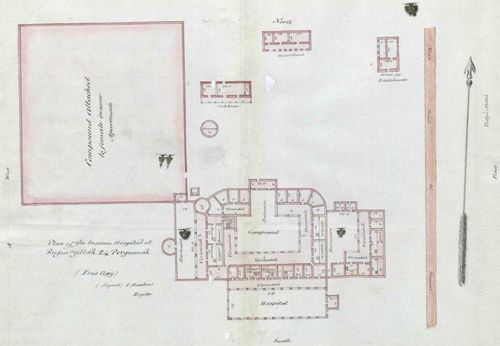 All the hospitals were concerned with providing some amusement or employment for the patients on a voluntary basis, and most had a garden to which the patients had access. However, the Russa Hospital was particularly successful in cultivating a wide range of botanical products, specimens and seeds of which were sent back to England and distributed to other cultivators throughout India. Among the products the patients cultivated or experimented with in the hospital gardens were:

The patients’ botanical endeavours were recognised by learned botanical organisations. For instance, the favourable results of experiments in cultivating the cactus plant, and rearing the cochineal insect, were published by the Agricultural Society in 1836. Dr Strong reported that the patients had successfully cultivated sapan wood, with its seeds being sent to the Agricultural Society, and distributed throughout India. He sent large quantities of the wood to Australasia, where he expected it would make excellent hedges. The Mysore thorn was also cultivated with the same objective.

Of all the occupations available to the patients, the cultivation of coffee was found to be the safest and best, with Dr Strong reporting that “Its cultivation is agreeable to the Insanes and occupies their attention a good deal and I believe has gone far to enable me to discharge many cured of their malady sooner than I could have done without such resources”.

Many of the stronger patients also engaged in building and landscaping work to improve the hospital's grounds, while the female patients were engaged in “spinning cotton, beating, shelling and picking rice, preparing fish spices and vegetables for the cookroom”. Most of the coffee was picked by the women, with some cooking their morning and evening meals.

The correspondence reporting on the condition and management of these hospitals can be found in the India Office Records. The report by Dr Strong on the gardens at Russa has been digitised as part of the Botany in British India Project.

Posted by Margaret.Makepeace at 08:15:00 in Health , Innovation , Science and environment , Work