The ‘laughable attitudes’ of Billy Noon

How was such a peculiar, irritating and unconventional character as Master Bookbinder Billy Noon (1772-1820) ever admitted into the august Worshipful Company of Stationers?  Noon supervised 5 apprentices from 1806-13 at his workshop at 30 Warwick Lane in London and participated in several trade societies but was more renowned for his practical jokes than his bindings. 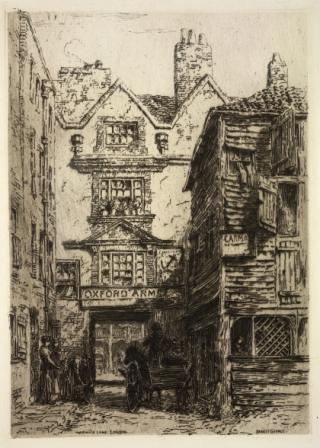 Warwick Lane, the scene of many of Billy Noon's escapades from Ernest George, Etchings of Old London (1884) Images Online

Noon knocked off the chimney pot of a local pub to win a bet. He climbed on to his own roof and sounded off a police rattle.  Once a crowd had gathered below, Noon emptied a slop pail over them.  This led to a fine, but such punishment was no deterrent.  Noon jumped onto passing wagons full of hay, played an organ in the middle of the night and threw offal at the waistcoat of a passing gentleman.  Living near Smithfield meat market, there was a lot of offal about, and also livestock.  Noon enjoyed annoying the animals by firing peas at them. Once a bull nearly got the better of Noon by cornering him in an alley but “he, by some dexterous movement which was neither perceived by the eyes of the bull nor by the bystanders, got through betwixt its legs and mounted its back in triumph”.

Fellow Stationers were a favourite target. At official dinners, Noon would pull faces at the diners at the top table, making them laugh so much that they couldn’t eat. A contemporary description relates that Noon was “a smartish chap, his activity was very great and his grimaces were most laughable - he could put his legs up behind his shoulders – and the great [comic actor] Chas Mathews did not surpass him for ludicrous changes of physiognomy and laughable attitudes”. 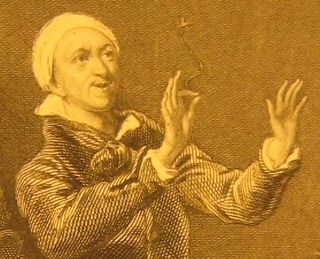 It is no wonder that “the Stationers’ Company offered [Noon] over and over again large premiums to withdraw … but with no success”.

John Jaffray Bookbinder. A collection of manuscripts relating to the art and trade of bookbinding. Mic.A.19964.