The funeral of Emily Wilding Davison took place in London on 14 June 1913, six days after she died from injuries sustained at the Epsom Derby. There was a procession with 5000 suffragettes and a service at St George’s Church in Bloomsbury.  Emily's body was then taken by train for burial at Morpeth in Northumberland, her mother Margaret’s birthplace and home.  Today’s story is about Maud Arncliffe Sennett and how her scrapbooks reveal the part she played in Emily’s funeral.


Christmas crackers and women’s suffrage might seem an unusual combination of preoccupations – but they combine in the person of Alice Maud Mary Arncliffe Sennett (1862-1936). The daughter of an Italian confectioner, she carried on the family ornamental confectionery and cracker manufacturing business, with her husband Henry, and advertisements for their crackers often appear in programmes for suffrage fairs and similar events. 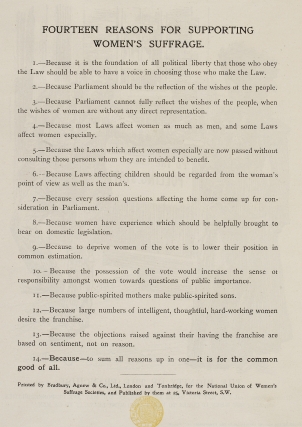 Her interest in women’s suffrage began in 1906 when she read a letter by Millicent Fawcett in the newspaper, and she was subsequently active in various organisations within the suffrage movement until about 1918. A former actress (under the name Mary Kingsley), she was much in demand as a speaker at meetings across the country. She provided several thousand red and white rosettes for the Mud March in February 1907 – so called because of the inclement weather on the day - and was briefly imprisoned in Holloway in November 1911 for breaking the windows at the Daily Mail offices*. In later life, she founded the Midhurst and Haslemere Anti-Vivisection Society. 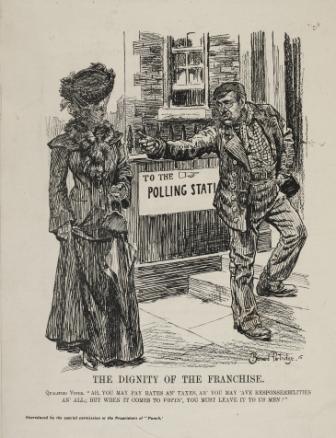 'The dignity of the franchise'. A cartoon reproduced from 'Punch', showing a man telling a woman to leave voting to the men. Arncliffe Sennett Collection C.121.g.1 volume 1  Images Online

At the British Library we have over 30 volumes, primarily scrapbooks arranged chronologically, crammed with news-cuttings, correspondence, leaflets, pamphlets, programmes and other ephemeral material which she collected, some of which you can see here. In volume 23, amid the newspaper-cuttings, is Maud Arncliffe Sennett’s ticket to the memorial service for Emily Wilding Davison at St. George’s, Bloomsbury on Saturday 14 June 1913, annotated on the back to indicate that she was representing the Actresses’ Franchise League. Related material includes a leaflet ‘In Memoriam’ of Emily and the hymn sheet from the memorial service.

In an apparently unplanned gesture, Maud Arncliffe Sennett joined the train taking Emily Wilding Davison’s body north at King’s Cross, and volume 23 also includes a “piece of the yew tree that lined her [Emily’s] grave” in Morpeth. During her stay there she met Alexander Orr, a businessman from Edinburgh, and this meeting led to the creation of the Northern Men’s Federation for Women’s Suffrage, a group initially gathered to form a deputation to the Prime Minister, Herbert Asquith, but which continued until 1919 with Maud Arncliffe Sennett as President.

*The “Bills for the impedimenta with which I broke Lord Northcliffe’s windows” (in vol. 15 of the collection) can currently be seen in the Historical Documents cases in the Sir John Ritblat Gallery.

Posted by Margaret.Makepeace at 08:15:00 in Conflict , Politics , Propaganda , Reform , Work