In 1833, following the abolition of slavery in the British colonies, £20 million was awarded to the slave-owners in order to compensate for their loss. However, the recipients of this compensation were not simply the owners of vast West Indian plantations. Men, and women, of much more modest means also claimed compensation for their enslaved servants. 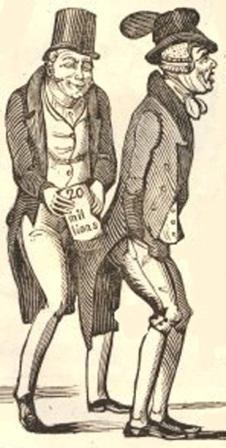 One of these women was Dorothy Little, a 70 year old widow who lived in Clifton, near Bristol. In 1833 she claimed £297 1s 6d for 13 Jamaican slaves and wrote multiple letters to the Slavery Compensation Commission asking for information and advice.

Dorothy Little’s letters demonstrate an active involvement in the slave compensation process. It is clear that she was acutely aware of the position she found herself in. ‘There is a wide difference between the situations of those who... are Owners of Slaves only and those who are owners of Estates and also of the Slaves,’ she noted. As a slave-holder who owned no land she was in a particularly vulnerable position. Indeed, since women constituted a large proportion of non-land-holding slave-owners they were, on the whole, disproportionately affected by the privileging of land in the compensation process. Dorothy Little clearly recognised this: ‘Your Petitioner…believes that there are many in her situation, but they are principally Widows and Orphans and she is sorry to perceive that the large Proprietors have not had the generosity to put forward their peculiar situation’.

Despite politics supposedly being a masculine domain, Dorothy Little is unashamed to reveal that she has ‘with the greatest attention read every debate in the House of Commons on the West India question’.  Indeed, she felt so passionately about the fact that in her view the compensation punished those who did not own land that she sent a petition to Lord Stanley, the colonial secretary, voicing her concerns. She questions why she cannot be given ‘£100 a piece for [her slaves]…which is the sum the French received for theirs in America’, demonstrating that her considerable knowledge extended to global as well as domestic politics.

However, the language she employed in her letters was inherently gendered. She deliberately and persistently used her position as an elderly widow to present herself as vulnerable and in need of protection. In asserting that ‘it is quite inconsistent with the character of the noble Englishman to reduce aged widows to beggary by forcibly taking their property from them’, Dorothy Little is fundamentally grounding her argument in early 19th century conceptions of masculinity and femininity. The proper role of the ‘noble Englishman’ was to provide for any dependents- primarily women and children- who were wholly reliant on him for financial support.

Dorothy Little was thus an intelligent, informed and strong-willed woman who simultaneously both challenged, reinforced and manipulated early nineteenth century notions conceptions about masculinity, femininity and the role of women in order to achieve her ends. This end, it should not be forgotten, was receiving money in order to compensate for the loss of property in people.


Hannah Young
PhD student on UCL's Legacies of British Slave-Ownership project with a particular interest in women slave-owners and relationships of power, gender and property.

Records of the Slavery Compensation Commission are held at The National Archives in series T 71. Papers concerning Dorothy Little’s claim are in TNA: T 71/1608.

Posted by Margaret.Makepeace at 08:15:00 in Politics , Reform , Slavery