As well as being a successful campaigner for women’s rights in Britain and an Independent Member of Parliament, Eleanor Rathbone was involved in the discussions surrounding Indian constitutional reform in the early 1930s and was also passionately interested in the issue of child marriage in India.

Eleanor Rathbone submitted papers to the India Franchise Committee (1932) which was considering voting rights for women. Rathbone’s involvement here was controversial. By 1929, women held the provincial franchise in India on the same terms as men. However, as the franchise was based on property, it was heavily weighted in favour of men as few women in India owned property in their own right. The problem was colourfully illustrated in a ‘Memorandum on certain questions affecting the status and welfare of Indian women in the future constitution of India’, which was addressed to the Round Table Conference in London (1930), and to which Rathbone was a signatory:
“We are reminded here of Aesop’s fable of the Fox and the Stork: “Mr Reynard invited Mrs Stork to dinner. But she found that the feast consisted of broth served in a flat dish. Mr Reynard lapped up the broth easily with his flexible tongue. But Mrs Stork with her long beak could only peck at the dish and went hungry away.” So it has been in the past with the women of all countries; so it will be in the structure of India’s future constitution, if the needs of both sexes are not kept continually in mind by those who frame it”. 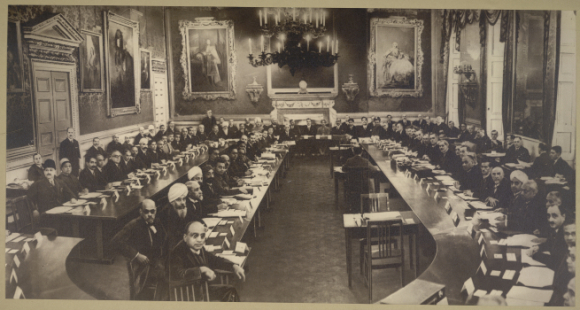 Rathbone believed that women should be regarded as joint owners of property with their husband, and that Indian women should have seats in the provincial assemblies reserved for them. Thus Rathbone found herself opposing the leading Indian feminists who wanted to remove the property qualification and who did not favour reserved seats for women.

This conflict can be clearly seen in the files of the India Franchise Committee. Rathbone tended to portray the Indian feminists as a minority group. Following a trip to India in early 1932 to gauge the views of Indian women, she stated in a letter to Lord Lothian, Chairman of the Committee: “I expect you found, as we did, that the demand of the All-India Women’s Conference for complete adult franchise and no reservation of seats for women, really represents a very small body of opinion.” In the notes of her trip she wrote: “We found practically no support for immediate direct adult franchise, except among the ladies of the A.I.W.C”, and “Among the women seen, I think at least four-fifths desired reservation and were usually quite clear and emphatic about it”.

By contrast, a memorandum submitted to the IFC by the All-India Women’s Conference stated their position clearly: “The A.I.W.C. as representing the thinking womanhood of India, is strongly of the opinion that no method other than that of adult franchise – by which is meant the right of every man or woman of the age of 21 to vote – without any special expedients will avail for the proper placing of this country on a truly democratic basis for the realisation of responsible government as denoted by the accredited phraseology of ‘government of the people, by the people and for the people’”.

However Rathbone would ultimately play a large part in shaping the way women were incorporated into the new Government of India Act of 1935, especially with the introduction of reserved seats for women.

Posted by Margaret.Makepeace at 16:02:00 in Politics , Propaganda , Reform

Posted by Margaret.Makepeace at 4:02 PM