Although the struggle to enable women to vote was put on hold during the First World War, this doesn’t mean that activists were idle. The legal right to vote in 1918 was class-based, covering only those who owned property or had graduated from a British university. So there was still much to do, to achieve parity with men, regardless of one’s educational or economic status, which finally happened in 1928.

Alongside the Suffragettes’ movement as we think of it, women were cutting more pieces of the social cake for themselves. Women’s organisations in Britain began advocating for better social conditions in the nineteenth century, and have launched many reform movements since then. As you’d expect, many of the groups were concerned with traditional women’s issues such as family planning, child welfare, state-funded and religious education, public safety, health care, recreation, and of course the right to vote. 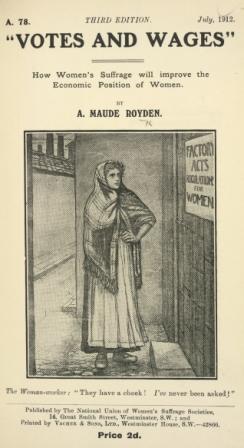 From Votes and Wages: How women's suffrage will improve the economic position of women (National Union of Women's Suffrage Societies, 1912).   Images Online


The Women’s Co-operative Guild (WCG) sprang from the British co-op system of commerce in the 1880s and gradually became self-governing. By the 1920s its working class base allied itself with the Labour Party, despite the latter defeating their advocacy of birth control.  Allies are never perfect.

The Guild persevered, maintaining in its core agenda of women’s rights and resolute pacifism. This last unrelenting political platform began to crumble as the Second World War was waged against European fascism. In 1940-1941, the group lost almost half its membership to the Women’s Voluntary Service.

But back in the Suffragists’ day, the WCG enabled many working class women to represent themselves in workers’ movements. And a major documenter of this scene was Margaret Llewellyn Davies. She published pamphlets such as The Three Wheels of a Store’s Machinery (1901), and books including Maternity:  Letters from Working-Women Collected by the Women's Co-operative Guild (G. Bell, 1915).  A collection of Co-op women’s testimonies were collected as Life as We have Known it, and published by Leonard & Virginia Woolf in 1931. The feminist publisher Virago re-published it as a classic in 1977 and in 2012.

The Co-op has not shirked from documenting its own history. A year before universal suffrage was extended to women, the association published Catherine Webb’s The Woman with the Basket: The History of the Women’s Co-operative Guild, 1883-1927, and a half-century later they distributed Jean Gaffin & David Thomas’ Caring and Sharing: The Centenary History of the Women’s Co-operative Guild, which went to several editions. The Guild published numerous tracts, reports and monographs to do with employment economics and public health, issues that worked their way into bills submitted in the Houses of Parliament.