Today’s blog post commemorates the Battle of Waterloo which was fought on 18 June 1815. But it is not about those famous leaders the Duke of Wellington or Napoleon Bonaparte, or military tactics. It is the story of a horse stolen at Waterloo and the man who took her.

As the battle dust started to settle, Captain John Tucker of the 1st Battalion 27th Regiment of Foot decided to take advantage of the chaos and ‘forcibly took and converted to his own use a certain bay mare, belonging to some British regiment of dragoons, or regiment, or officer, or soldier in the British pay’. 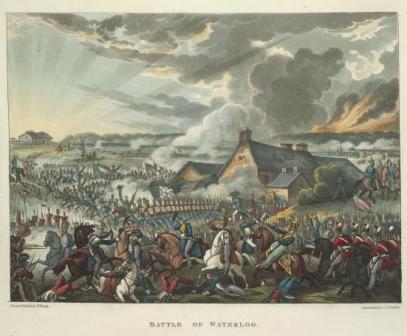 The Battle of Waterloo from The wars of Wellington, a narrative poem (London, 1819)  Images Online

Contrary to the orders of the High Command forbidding all profiteering, Tucker took the horse and removed the regimental mark from its side.  Man and horse then journeyed to Brussels. The whole affair would probably have gone unnoticed, but Tucker wanted to sell the mare and put an advert in Galignani’s Messenger, an English-language newspaper published in Paris at that time. That was unwise and the authorities took the horse back on 17 September 1815.

After rejoining his regiment in Paris, Tucker faced a court-martial on five charges of ‘scandalous and infamous conduct, unbecoming the character of an officer and a gentleman’. As well as the horse, he was accused of stealing the property of his fellow officer Captain Holmes who had been killed in the battle. Tucker was said to have opened Holmes’ ‘portmanteau, trunk, and canteen, and other baggage’, and to have taken the contents. He was found guilty of stealing the mare and guilty of ‘great impropriety’ concerning Holmes’ belongings. He was sentenced to be dismissed from the service. However Tucker was recommended to mercy and he was placed on half-pay.  His commanding officer Colonel Warren was criticised by the court for ‘living in habits of social intercourse with the prisoner’ and neglecting to press charges sooner. The court also suspected that the charges against Tucker had been brought because he had disagreed with his fellow officers over ‘irregular proceedings’ involving Lieutenant Alexander Fraser who was allowed to resign rather than face a court-martial. Fraser was later re-admitted to the regiment. The entire officer corps of the 27th Regiment of Foot received a reprimand from the court.

Tucker’s half-pay punishment does not appear to have been implemented and he transferred to the 8th Regiment of Foot.  He left the Army in 1822 after a second court-martial found him guilty of threatening behaviour and being absent without leave.  In 1846 he published a life of the Duke of Wellington and he died in 1852.