One night in June 1940, ‘Abd al-Razzaq Razuqi, the British Residency Agent in Sharjah put on a disguise and walked to the palace of Shaikh Sultan bin Saqr Al Qasimi, the ruler of Sharjah. After hearing reports that the Shaikh was playing German government radio broadcasts in Arabic so loudly that they could be heard 200 yards away, Razuqi - who is usually referred to as Abdur Razzaq in the India Office Records - wanted to establish for himself if the rumours were true.

After his visit Razuqi wrote to the British Political Agent in Bahrain, Hugh Weightman, explaining that “a large crowd gathers there [the palace] to hear the German news” and that “some people had been talking freely in the town about the mighty power of Germany and the collapse of France which would soon be followed by the complete crush of Britain”. He also reported that the slogans ‘Long live Hitler’ and ‘Right is with Germany’ had been chalked on walls in the town. Razuqi established that the primary source of this anti-British sentiment was the Shaikh’s secretary, Abdullah bin Faris. Razuqi wrote that although the Secretary was full of praise for the British government to his face, “behind the curtain” he had induced ordinary people under his influence to spread rumours about the victories of the Germans.

Although reports of German radio broadcasts in Arabic and the existence of pro-German sentiment in a desert town on the Persian Gulf coast may seem incongruous, given the large-scale propaganda efforts that the German government directed towards the Middle East during World War II, they are not in fact surprising. Between 1939 and 1945, the German government broadcast Arabic language programmes to the Middle East and North Africa seven days a week.

The Arabic broadcasts on German radio presented the Nazi regime as staunch supporters of anti-imperialism, especially against Britain. Unsurprisingly they found a receptive ear amongst individuals under the indirect control of British colonial authorities; and at a time when – after the fall of France in May 1940 – the prospect of Britain losing the war against Germany was real. Razuqi and his superiors were fully aware of the importance of quelling any anti-British/pro-German sentiment and took the matter seriously. Razuqi confronted the Shaikh about his activities, and demanded an explanation. 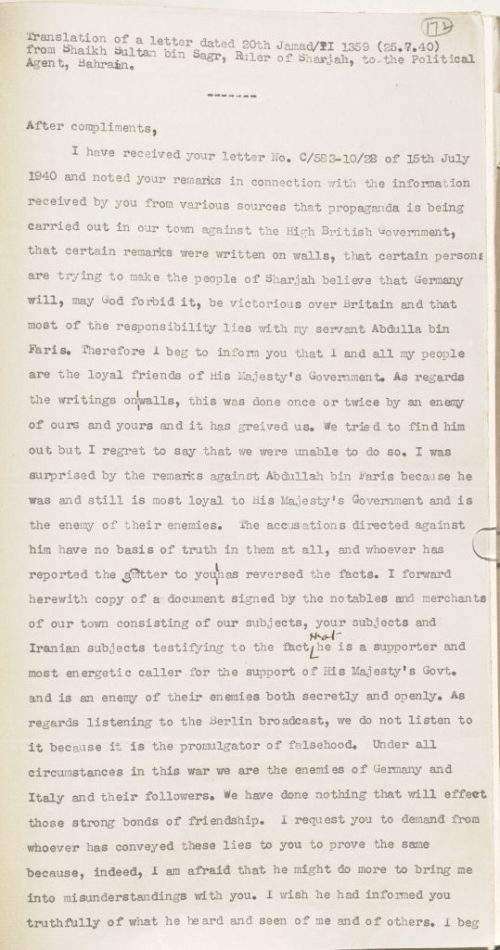 Responding in July 1940, Shaikh Sultan sent a letter to Weightman proclaiming his absolute loyalty to Britain and wholly denying the accusations made against his secretary bin Faris. The Shaikh stated that “under all circumstances in this war we are the enemies of Germany and Italy and their followers”.

In October 1940, Razuqi reported to Weightman that after his warnings the Shaikh was now “avoiding all talks and topics about the Germans and Italians and is doing his best to show that he is the most loyal and sincere friend of the British government”. 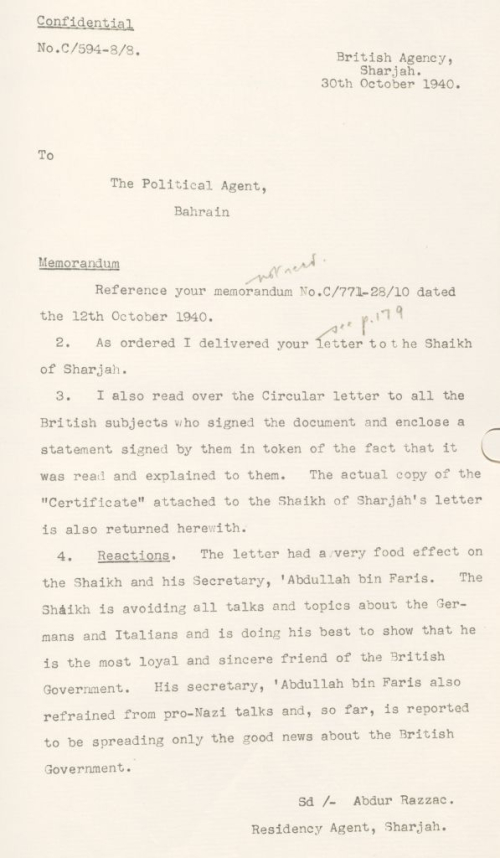 This incident illustrates not only the surprising geographical and linguistic extent of German propaganda efforts during World War II, but also how dangerous British authorities considered such efforts, even in far-flung parts of its global empire, thousands of miles away from continental Europe, the main field of conflict at that time.