George Stace appeared at the Oxford Petty Sessions in February 1893 charged with assaulting Oswald Claude Baker. Mr Stace was the schoolmaster of Headington and Oswald was his 11 year old pupil. Whilst there was no dispute that Stace had struck the boy, the prosecutor said the case rested upon agreement of what was ‘proper’ punishment and what was ‘excessive’.

Oswald was the son of gardener John Baker and his wife Sarah Ann. On the afternoon of 31 January he had gone to see the burial of Police Constable Knapp in the village.  His mother had told him that he could have a half-day holiday but, as the funeral procession started, Mr Stace had beckoned him to go to school. Oswald had bolted as soon as the master’s back was turned. 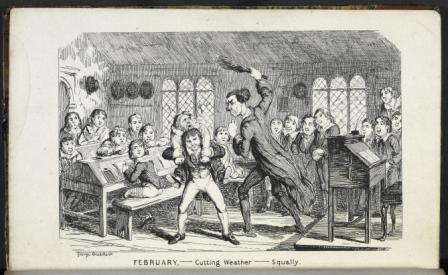 Next morning Oswald and two other boys were ‘thrashed’ with a stick by Mr Stace for disobedience.  Oswald claimed that he had been hit on the hands and across the legs: ‘it hurt him so much that he was lame at first and had to walk on his toes’.  John Baker told the court that he had later found his son crying with three bruises on the front of his thigh and hands so swollen that he could not clench them. John took Oswald to see Robert Hitchings the surgeon at Headington and to Mr Overton the curate.

Both Oswald and John were questioned about punishment within their family. Oswald said: ‘His father did beat him sometimes, but not more than once a fortnight, for disobeying him. He beat him with a strap, but not with a buckle’.  John said that he did ‘chastise the boy himself about twice a year with a strap, generally on the back’.  His son ‘was not a good boy’ but he was not a liar although cheeky and mischievous.

Mother Sarah Ann Baker also gave evidence.  She had taken her son to the vicar Mr J. H. Scott-Tucker and to Mr Stace.  The schoolmaster said the boy was making a fuss and that his fingers were ‘naturally swollen’.  He denied making the bruises saying ‘it was the colour of the boy’s skin’ and said that he had not hit him on the front of his legs.

When Robert Hitchings had examined Oswald he had seen a large bruise measuring 3 inches by 2½ inches on his left leg and there were marks on the other leg possibly caused by several blows on one spot with a stick.

Three other pupils were questioned by the court: Harry Shepherd aged 9, Bertie Edney and William Price, both aged 13.  They all reported that Stace did not hit Oswald on the front of the legs. The vicar then appeared as a character witness for the schoolmaster: ‘He could not speak too highly of Mr Stace, and his discipline was extremely moderate’.

The case was dismissed, ‘the Bench considering that the boy deserved to be punished, and that he was not punished excessively’.

Posted by Margaret.Makepeace at 08:15:00 in Conflict , Crime , Domestic life , Health