Throughout the eighteenth and nineteenth centuries, the problem of rotten teeth was a concern that spanned the classes, although with the price of early dentures ranging from between half a guinea to forty pounds, only those from the upper ranks could afford to do very much about it. Early false teeth were heavy and largely for show, incapable of allowing intelligible speech and seldom secure enough to permit chewing. Indeed, various social historians have claimed that the inadequacy of early dentures was one of the main reasons behind the Victorian upper class vogue for eating in one’s bedroom before dinner to insure against embarrassment at the table. Frequently made from ivory or bone and with no enamel to protect them, early dentures were highly susceptible to decay, which often led to infection and vile-smelling breath, and those that weren’t, though they were less prone to rotting, had a rather more unpleasant provenance. 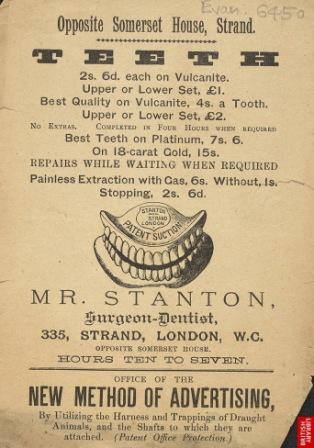 On 18 June 1815, the French Army was defeated at the Battle of Waterloo. This culmination of some twelve years of war between France and the opposing European coalition may have effectively ended the political and military career of Napoleon and led to the deaths of in excess of 51,000 men, but it was not without its curious benefits. For during the first half of the nineteenth century, the most popular and profitable breed of dentures available were those made from genuine second-hand teeth, a sudden surfeit of which had just been rendered effectively up-for-grabs by the cull of 1815. These so-called “Waterloo Teeth” – a moniker which quickly became applicable to any set of teeth pilfered from the mouth of a dead soldier and continued in use throughout the Crimean and American Civil Wars – were vastly preferable to those more commonly used in the eighteenth century. These pre-war teeth were frequently acquired from executed criminals, exhumed bodies, dentists’ patients and even animals and were consequently often rotten, worn down or loaded with syphilis. The prospect of an overabundance of young, healthy teeth to be readily pillaged from the battlefield must have been a dentist’s dream. 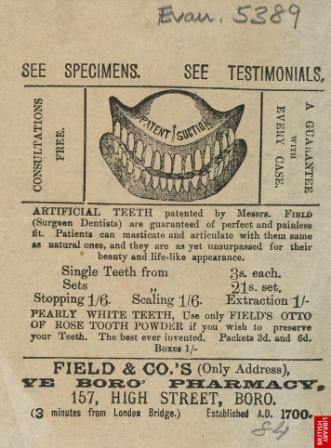 This fashion for “genuine” dentures, popular though it was, was nonetheless dogged by unappealing “graverobber” connotations and it was consequently during the mid-nineteenth century that more sustainable and palatable styles of false teeth came to the fore. Porcelain teeth, which had actually been in use as far back as the 1770s but had struggled with a tendency to chip, underwent a great transformation thanks to Claudius Ash, a silver and goldsmith who brought his expertise to dentures in the 1820s and 30s when he started manufacturing porcelain teeth mounted on gold plates, with gold springs and wire to hold them in place and make them easier to talk and eat with. Ash & Sons, which became a successful company, went on to devise dental plates made of vulcanite and silver, as well as sickle-shaped metal insets to stabilise single false teeth, aluminium and gold mesh dental strengtheners and silicate cement for fillings, among much else. It was from here that the manufacturing of false teeth really took off, with dentists’ advertisements from the British Library Evanion Collection showcasing the sudden diversity of materials and plates available – from platinum to 18 carat gold. That said, the use of the genuine article in the manufacturing of Victorian dentures did not let up throughout much of the late nineteenth century and it was not until the early twentieth century that one could be certain not to find anyone smiling at you with a set of dead men’s teeth.

Posted by Margaret.Makepeace at 08:15:00 in Domestic life , Health , Innovation , War