At the turn of the nineteenth century, wigs were very much a dying fashion. Whilst the Georgian era was a period visually defined by its towering powdered wigs, usually made from human hair (but in cheaper cases, baked wool or the hair from horses, goats and yaks), the 1830s onwards began to give way to altogether less extravagant modes of hairdressing.

After the French Revolution, wigs and false hair became, both for women and men, an unfashionable indicator of deception and very much an outmoded trend. This is not to say that they weren’t still common – women in particular continued to use clip-in postiches (hairpieces) to create more lavish hairstyles for much of the nineteenth century – but the truth of their artificiality was now something to be hidden at all costs. Indeed, a letter sent to Queen Victoria from her aunt Queen Adelaide in 1843 speaks to the frankly laughable status of wigs at that time, declaring it to be a great shame that Victoria’s eldest daughter had been forced to wear a powdered wig and how strange she must have looked, whilst jokingly suggesting that her brother Edward should be made to wear “einer Allonge-Perücke” – a long Periwig – in sympathy.

The vast wigs of the Georgian era had certainly come with their own hazards, with false hair often so heavy that people developed sores on their scalps, as well as being prone to lice-infestation and highly combustible thanks to the animals fats used for styling. Wigs in the nineteenth century, however, came with their own rather more social dangers. For men, in particular, a wig was now considered a preposterous vanity, whilst women who wore wigs were accused of shameful deception in the pursuit of husbands. Wigs of the Victorian era were advertised in a guilty kind of code, often as “gentlemen’s invisible perukes” or “ladies’ imperceptible hair coverings”, and it was common practice for no one but the hairdresser to be aware if one was fitted for a wig. 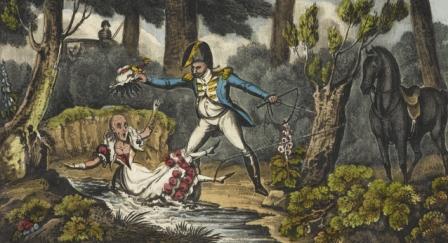 In his book on the history of false hair, John Woodforde tells a particularly bizarre story once related by a retired Victorian wigmaker, in which a girl, whose mother shaved her head and fitted her with a blonde wig to make her more appealing to suitors, never removed the wig for the entirety of her resultant marriage and even had it arranged that should she die before her husband, her hairdresser should come in and dress the wig in her coffin before anyone could see. This kind of extensive deception was all too common and echoes the shame associated at the time with false teeth – the wearers of whom often never removed them, with the result that the dentures were occasionally swallowed whole or cemented to the remaining real teeth by tartar. One of the sad truths behind this level of deception, of course, was that many of the women still wearing full wigs by the mid-nineteenth century were usually wearing them for reasons other than vanity. Indeed, it was pretty generally understood that any woman suffering from baldness was probably a descendant of syphilitics – a condition as advisable enough to conceal as baldness itself.

By the end of the nineteenth century, the tide of opinion was turning, on men’s wigs at least, with various fashion publications, including the Hairdresser’s Weekly Journal, tacitly owning that hairpieces made to cover masculine baldness should perhaps be recognised as a necessity, rather than a vanity. In the case of female baldness, however, the taboo was carried through well into the end of the century, with the need for a wig still a secret to be kept firmly under one’s hat.

The Letters of Queen Victoria: A Selection From Her Majesty’s Correspondence ed. Arthur Christopher Benson (London: 2009)

Simon - so many great examples! The Alcott novella reminds me a good deal of Swift's "A Beautiful Young Nymph Going to Bed" (1731), though I would say the latter is, again, rather less sympathetic.

Interesting piece, thanks. I'm reminded of Dickens' character in Dombey and Son (1848), the scheming, painted, bewigged Mrs Skewton (aka Cleopatra), who auctions her beautiful daughter - a natural beauty, unlike her own, artificially contrived, cosmetically enhanced parody of it, a mask) to the highest bidder. LM Alcott, writing as A.M. Barnard in 1866 in 'Behind a Mask, or A Woman's Power', portrays a similarly artificial beauty, who also dismantles her superficial, unnatural mask of allure at bedtime to reveal the haggard reality the cosmetics, wigs and false teeth covered up. The moral (misogynistic) stance is clear in each case, though Alcott is not surprisingly more sympathetic to her character's motives than Dickens is.