Fear no more the heat of the sun

When the Royal Commission on the Sanitary State of the Army in India began to gather evidence in 1861, the distinguished scientist and former army surgeon Julius Jeffreys was an important witness. Jeffreys had given much thought to improving the health of the troops. To the commissioners, he expounded his designs for barracks, tents, metallic cloth, thermometers, wells, and headgear. 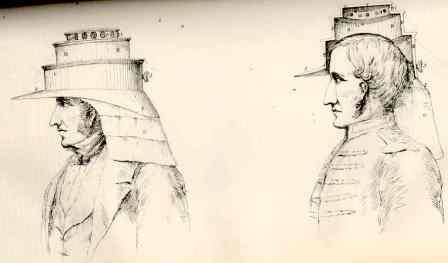 For soldiers in India, the great risk to health was heat. Jeffreys introduced the prototype of his ‘solar hat’. Made of stiffened felt, whalebone, and pleated horsehair cloth, the hat was designed tall to keep the sun’s rays far from the head, and tiered to allow the wearer to move smoothly through high winds. A system of flexible inner bands, cords, and pegs made the hat adjustable. On long marches, Jeffreys advised, the hat might be worn ‘loose’, to be tightened in an instant if an enemy appeared (see left and right illustrations). Ventilation was a special feature. Holes around the top brim allowed currents of air to sweep into the hat, round its inner chambers, and out again through holes in the brim below.

The commissioners received these explanations with interest. One of their number, William Farr, raised doubt only once, when told that the downward pressure on the wearer’s brow was balanced perfectly by the upward pressure to the top of his head. Still, Farr noted, it was a lot of pressure.

The hat seems to have remained in prototype. But a tropical helmet that Jeffreys designed was widely adopted. Neither was Jeffreys’ understanding of air convection ever in doubt.  His serious interest in the subject had already led to the medical invention which made him well known: the respirator.

Posted by Margaret.Makepeace at 08:15:00 in Health , Innovation , Science and environment

Julius Jeffreys (1800-1877) was a fascinating character. Not only did he invent army headgear, he invented an early air-conditioning system and the respirator. He was also active in social issues of the day, in particular drug and alcohol abuse. There's a brief biography on Wikipedia: