In 1865, the physiologist Claude Bernard described the life sciences as “a superb and dazzlingly lighted hall which may be reached only by passing through a long and ghastly kitchen.”  Bernard’s “ghastly kitchen” was a metaphor but 200 years earlier there were plenty of kitchens where work of varying ghastliness took place.

Dissection of living and dead animals was widely practiced throughout the 17th century, mostly in private homes. Looking at books on dissection such as De motu cordis – William  Harvey’s 1628 work on his discovery of the circulation of the blood – alongside  books on cookery gives us a new view of how science was done in this period. 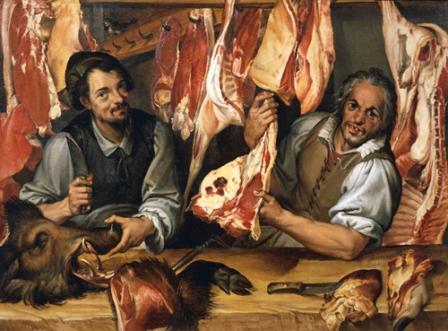 The aristocratic kitchen was a place well-accustomed to the presence of blood and the dismemberment of animals, and well-equipped with knives. The carnivorous habits of the aristocracy can be viewed in Pierre de La Varenne’s 1651 Cuisinier François (The French Cook, 1653) which commenced with a lengthy list of meats proper to the season, and Robert May’s  Accomplish’d Cook (1660) opened with a list of carving terms for different animals. Contemporaries associated dissection with butchering, and viewed butchers, hangmen, and anatomists as morally equivalent.  The playwright John Gay urged Londoners in 1717

To shun the surly butcher’s greasy tray,
Butchers, whose hands are dy’d with blood’s foul stain,
And always foremost in the hangman’s train.

The boundary between culinary and scientific uses of animals such as lambs, pigs, and calves was slippery. Sixteenth-century naturalists such as Conrad Gessner (the British Library has his 1551 Historia animalium, one of the most important Renaissance works of natural history), included instructions for cooking certain animals.

Anatomists cooked or boiled animal and human parts for a number of reasons. Cooking helped to solidify and fix certain parts such as muscles to make them easier to observe, particularly under the microscope, and boiling was the most common method of cleaning flesh from bones to construct skeletons.

Before the invention of chemical assays, tasting was an alarmingly common way to test substances.  Like dissection, taste offered sensory access to the hidden processes of the body. In his 1651 work on generation, Harvey described his frequent tasting of chicken eggs over the course of their development, as well as the stomach contents of chicks and other animals, amniotic fluid, the milk of various animals, and blood. Smelling went along with tasting, and at least some of the smells of the dissecting room such as the metallic tang of blood and the sweetish reek of decaying flesh would have been familiar in the kitchen as well.

Dissection of living and dead animals, like cooking, was messy, noisy, and bloody, with dangerous instruments that should only be wielded by skilled operators. The ghastly kitchen was a fundamentally unsettling place, where animals were simultaneously domestic and scientific. In the kitchen, cooks and anatomists used all of their senses to cut, carve, cook, taste, and smell.

Anita presented this research at the 24th International Congress of History of Science, Technology and Medicine. You can watch some of the papers and read more about the event on the Congress blog.

Read the books cited by Anita at the British Library

Posted by Margaret.Makepeace at 08:15:00 in Domestic life , Health , Innovation , Science and environment , Work