The great popular uprising against British rule in India in 1857/58 commonly known as the Indian Mutiny, almost succeeded in sweeping Britain from its most prized Asian possession. The voluminous papers contained in the India Office Records relating to the Mutiny, record the turmoil the uprising brought about in the British Indian administration. The papers also record the aftermath, when scores were being settled and those Indians who remained loyal to the British were rewarded, often with property confiscated from those who had rebelled. 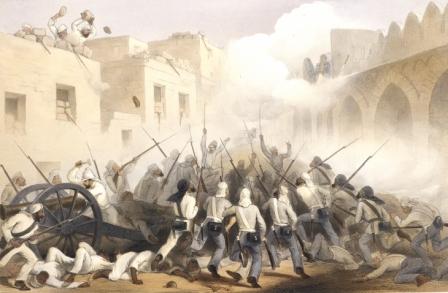 Among the Public Department papers relating to the Mutiny are lists of confiscated property which had belonged to those accused of being rebels. The lists generally give the names and residence of the rebels, particulars of charge and sentence, details of the property confiscated, and recommendations about how it should be disposed of.

Here are a few examples from a list of 210 cases of confiscated property in the District of Meerut, North Western Provinces:

Dhan Singh, a Jemadar with the Cantonment Police, aided the men of his village of Panchlee in plundering the Government station, for which he was executed and his property confiscated.

Rao Kishen Singh was a Kotwal (police officer) of Meerut. When the outbreak occurred he fled from his village of Rewaree and went to Delhi, where it was believed he had been killed. His property consisting only of some pots and pans and clothes was confiscated.

Abdul Lateef Khan was charged with rebellion and harbouring rebels and mutineers, and carrying on a treacherous correspondence with the ex-King of Delhi. He was sentenced by a Military Commission to transportation for life and confiscation of all his property. It was recommended that his house in Meerut city, valued at 1,000 rupees be given to Jhan Tirhan Khan and Sirdar Bahadur as a reward for their faithful services during the siege of Delhi.

The list does not just detail cases of individuals, but whole villages were held accountable. The inhabitants of the village of Jumalpoor were charged with the plunder of Government property from the Canal and closing the road to the village of Bhagput. It was attacked and burnt by British troops, with several proprietors being hung and the whole village confiscated.

The men of the village of Bhopoorah drove out the Government Sowars who had been sent to collect revenue. They then collected by beat of drum the surrounding villages. Bhopoorah was burnt by British troops, and the rights to the land given to a local Zemindar as a reward for his readiness in furnishing supplies to British troops.

The men of the village of Koondhera were charged with the murder of Lieutenant Willoughby and 4 other British officers who were refugees from Delhi. George Willoughby of the Bengal Artillery was one of the men responsible for blowing up the powder magazine at Delhi to prevent it from falling into enemy hands. Five men from the village were hung and the whole village confiscated.

Posted by Margaret.Makepeace at 08:15:00 in Conflict , Domestic life , Politics