Bertrand-François Mahé de La Bourdonnais is best remembered as the naval commander who captured the English settlement at Madras during the War of the Austrian Succession in September 1746. Having fallen out with his superior the Governor of Pondicherry Joseph-François Dupleix over the generous terms he offered to the English, La Bourdonnais returned to Europe and was captured at Falmouth. When cataloguing a volume of East India Company correspondence for 1747-1748, I discovered original intelligence reports submitted by the Admiralty and Post Master General to the East India Company. This correspondence adds significantly to La Bourdonnais’ own account of his capture published in 1748. 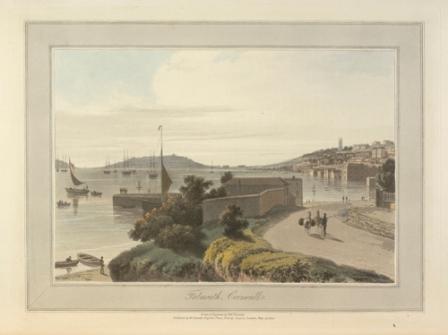 The initial report of La Bourdonnais’ presence at Falmouth was submitted to the Post Master General by George Bell on 4 January 1747. It recounts how La Bourdonnais left the East Indies in company of four French men of war which put in at Martinique following a hurricane. After sending his wife and family ahead with his treasure on board a schooner bound for Portugal, La Bourdonnais with four of his principal officers boarded a Dutch vessel bound for Holland, where he hoped to remain until he could settle matters with the French Court. Contrary winds forced the Dutch ship to put in at Falmouth where she waited ten days for provisions and an outward bound convoy. A local merchant learned that there were French officers on board the vessel and told Bell. Bell’s report led to the capture of La Bourdonnais and his retinue by HMS Mercury commanded by Captain Bladwell. In light of his generous treatment of the English at Madras, La Bourdonnais was treated well, granted parole and allowed to return to France.

Bertrand-François Mahé de La Bourdonnais, The Case of M. de la Bourdonnais in a letter to a Friend (London, 1748).

Posted by Margaret.Makepeace at 08:15:00 in Conflict , Journeys , Politics , War