Growing up in North London, where I was born, I was acutely aware that neither my family nor I had a stake in patriotic narratives that centred upon grandfathers and great grandfathers who had heroically fought in world wars.  This, I thought, was because my heritage stretched across to India.  Archives deposited within the British Library, however, confront this misnomer.  They highlight key contributions South Asians made in British war efforts, both in the trenches in the First World War, as well as during the Second World War.  These moments in history where imperial subjects made crucial contributions to British war efforts, now unveiled, redistribute and share memories that are largely absent in the way we remember participation in conflicts.  A testament to these hidden stories of conflict, and to the many more interventions South Asians have made, is Asian Britain: A Photographic History.  Having been published earlier this month, this photographic history, authored by Professor Susheila Nasta and compiled with Dr Florian Stadler, extensively draws upon the British Library’s collections.  The book extends the research of a long collaboration between the British Library and The Open University on the Making Britain and Beyond the Frame projects. 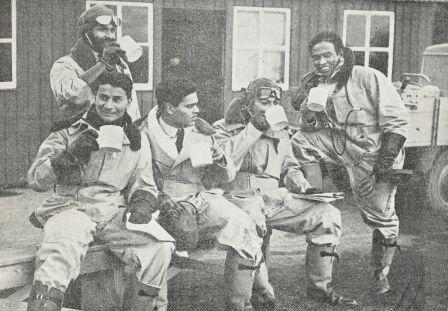 British Library SW 107, also in Asian Britain, pilots  have joined the RAF to compensate for shortages (1942)

Alongside representations of South Asians during wartime, Asian Britain too foregrounds other stories that tell of the multifaceted and long relationship between the subcontinent and Britain.  One of these is the narrative of the South Asian community displaced from their settled homes in East Africa, in the sixties and seventies.  Many of these families came to Britain, and indeed mine was one of them.  The painful expulsion of the Asian community from Uganda in 1972, by Idi Amin, is emblematic of this larger history. 2012 marked forty years since this moment when Britain became the home of many double migrants: double migrants who had first settled in Africa from India, and have since become an integral part of British life.  These forty years can, however, be contextualised by a much longer four hundred year old presence of South Asians in Britain, and it is this surprising, complex and challenging history Asian Britain pictures.