Queen Victoria was an enthusiastic participant in the Hallowe’en celebrations which took place every year at Balmoral Castle in Scotland.  Images of the Queen perpetually dressed in black widow’s weeds, looking stern and ‘not amused’, are at variance with the contemporary newspaper reports of her joining in the merriment known as ‘Queen’s Hallowe’en’. 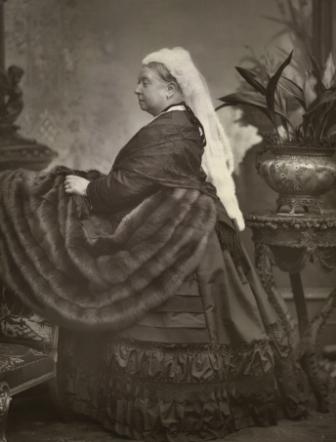 Preparations were made at the Castle for days beforehand.  As darkness fell on 31 October, the Queen drove out in an open carriage carrying a lighted torch.  She was followed by a procession of over 100 royal servants and tenants from the local farms with their families who also carried torches.  They marched through the grounds accompanied by a piper.  At the front of the castle was a huge bonfire made up of boxes and packing cases kept throughout the year especially for that purpose.  As the fire burned, a hobgoblin appeared pulling a cart containing an effigy of a witch.  There was a guard of fairies carrying spears.  The torch bearers gathered into a circle and the goblin threw the witch onto the bonfire watched by the Queen, her family and members of the Royal household.  Reels were then danced to the ‘stirring strains’ of Ross the Queen’s piper.  In 1874 the celebrations were supposed to end with a dance in the ballroom but this plan was dropped when some the revellers behaved in ‘a rather disorderly manner’ at the bonfire. 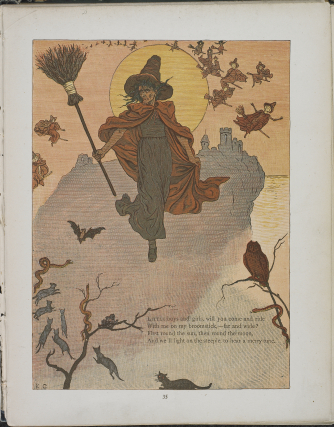 From Under the Window: Pictures and Rhymes by K. G. (London, 1879) Images Online

Queen Victoria wrote about Hallowe’en at Balmoral in her 1877 diary, describing how she hurried back from a drive to be in time for the parade.  Her daughter Princess Louise walked at the side of her carriage carrying a torch and looking to the Queen like one of the witches in Macbeth.  Prince Leopold and Victoria’s favourite servant John Brown were also there with torches and the procession had ‘a very pretty effect’.

Posted by Margaret.Makepeace at 08:15:00 in Domestic life , Leisure