Lay of the Red Moustache

This is a cautionary tale for all those attempting to grow a moustache for Movember.  Lay of the Red Moustache is ‘a doleful ditty, founded on facts’.  It tells the story of a young military officer who yearns to grow a splendid moustache to impress his lady love. 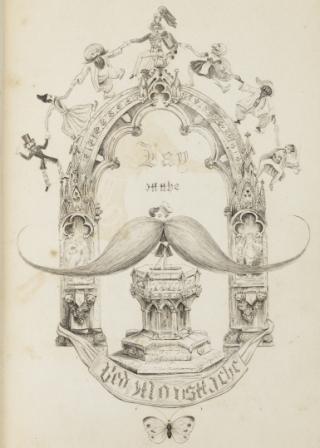 Frenzied, almost, his youthful brain,
On his profile the cornet glares;
With anxious finger, mirrors twain,
Investigates his face for hairs. 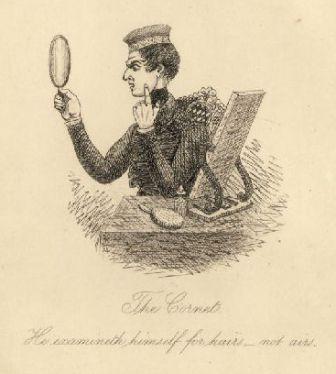 He paints on fake black moustaches to see how he would look.

Still he can make – and does -  untrue
Mustaches, growing in a trice,
From a pomatum, black of hue,
Purchased by Truffit’s kind advice.

Unfortunately his own moustache grows red, contrasting with the black hair on his head.

What ecstasy two sprouts of down
Would quickly o’er his soul have shed,
Had magnifying glass not shown
Too plainly they were yellow-red…

He encourages his moustache to grow with unguents including extracts of ‘Northern Bear’.  When he goes to see his love, he colours the red moustache with black pomatum . He whispers sweet nothings into her ear and then kisses her whereupon the black dye transfers to her face –

Seduced by beauty’s lips, and rash
Through love, forgetting wholly this,
A pair of duplicate moustache
Imprints he on her with a kiss. 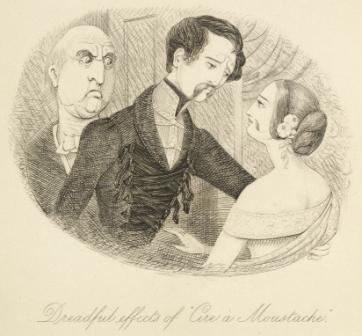 Oh, never can be deemed a grace,
Though perfect in their arc and hue,
Mustaches on a lady’s face!
But those she wore, not yet she knew.

At that moment her father enters, sees what has happened,  and swiftly sends the young officer on his way -

Unless you leave this roof of mine
Without an instant of delay,
Three flunkeys shall their strength combine
To prove to you the shortest way.

His love rejects him too –

This little billet-doux uproots
His trust: - “My love is chilled as ashes:
I knew how brightly blacked your boots,
But not that you had blacked mustaches.”

The young man flees to India 'in rage and shame'.

On his return, he visits his mother – 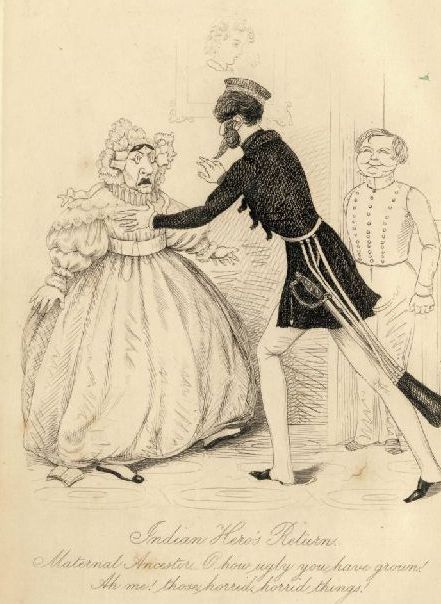 He sees his mother shrink, e’en she,
With awe, from his moustache of flame.
His mother shrinks from his embrace,
A troubled look all o’er him flings,
Shrieks – “Oh, how frightful grown your face!
Ah me, those horrid, horrid things!”

He then approaches some young relations - 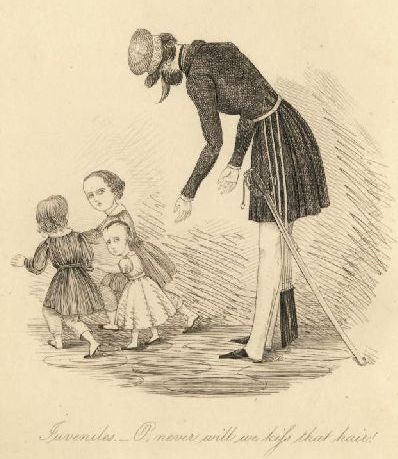 From unsophisticated sight
Of infancy he hopes, than this,
To win reception more polite,-
Of infant cousins begs a kiss.
Tott’ring on tiny legs away,
(After intense, disgusted, stare,)
Resolutely the children say:
“Oh, never will we kiss that hair!”

So he decides to be rid of his moustache –

He rushes to his razors, glares,
Wild-eyed, and – cuts off his moustache.
They part: those he had dreamed to bear
To him attached, from out the world;
Companions old! – as infants dear,
Loved, cherished, and caressed, and curled.

And finds that instead of fiddling his moustache, he now plays with his nose –

From habit, having no moustache,
He strokes, and twiddles with his nose:
So sore it swells, so red with rash,
Once more the ruddy fringe he shows.

Posted by Margaret.Makepeace at 08:15:00 in Domestic life , Journeys