New Year’s Eve seems an appropriate occasion to share something on the subject of temperance from the British Library’s collections. Alcohol’s Alphabet was published in London in the 1890s by the National Temperance League. Copies could be bought in bulk for distribution: 100 for one shilling, 1000 for six shillings. 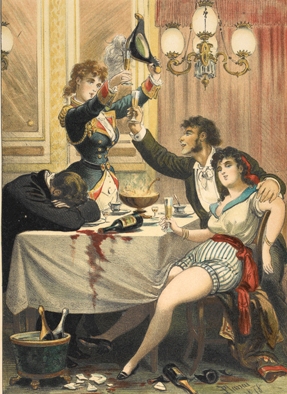 A is for Alcohol, a deadly, poisonous thing,
Which "biteth like a serpent", and doth "like an adder sting".
B is for Beer, a drink which English workmen love;
And Brandy – stay of sickness: both not friends but foes oft prove.
C is for Cider, which a harmless drink is deemed,
Yet which may work more mischief than the drinkers e’er have dreamed.
D is for Danger, which is always close at hand,
When among alcoholic drinks weak human creatures stand.
E is for Enmity, which arises from the strife
Engendered by the exciting draughts, and blights full many a life.
F is for the Fetters, which all drink-bound slaves must wear,
Which heavier grow as time goes on, and drag them to despair.
G is for the golden Grain God sends to bless and feed,
Which men pervert and change until it brings but great need.
H is for Hunger – the poor children’s dreaded foe:
What pangs, through parent’s selfishness, e’en tender babes oft know.
I is for Idleness, which follows in drink’s train
When men would rather tippling go than at their work remain.
J is for Jollity, which drinkers say they find –
Though far from "jolly" are the aches and pains oft left behind.
K is for the sad death Knell, which solemnly doth sound,
Telling when victims of the drink an early grave have found.
L is for the Licences, procured to buy and sell;
Too often dealers in strong drink the drunkards’ list will swell.
M is for the Mourning which is heard all o’er our land
O’er loved ones who on ruin’s brink with tottering footsteps stand.
N is for Nectar, to which men will liken wine,
When on the glittering festal board its sparkling beauties shine.
O is for drink’s Odour, to the drunkard sweetest scent
It tempts him past resistance when to drink he had not meant.
P is for the Prison, in which helpless captives lie
Who’re found "incapable" in the street when the "man in blue" comes by.
Q is for Quarrels, which are rife where drink doth reign,
And often end in fatal strife which brings the convict’s chain.
R is for the deadly Rum, which its thousands still will slay
While it – with Gin – acknowledged is as the tippler’s cherished stay.
S is for the trusted Stout, which as medicine is given;
It lends false strength, perchance, but oft to drunkenness has driven.
T is for the Tap, from which the toper is supplied:
Frequently is it running fast, but ne’er for long is dried.
U is for Uselessness, to which drink will quickly bring,
All who for strength in life and work to it for help will cling.
V is for the Vices which are nourished by strong drink
Which will not vanish till the power of King Alcohol shall sink.
W is for Wretchedness, which the heart and home pervades
In which this foe’s destructive hand has made its fearful raids.
X is the well-known X X – poor letter! much abused
By being in the brewing trade as a distinction used.
Y is for life’s Youthtide, which should be bright and glad,
But oft is rendered – by strong drink- gloomy and dark and sad.
Z is for the Zeal with which men seek their thirst to allay.
If they would but as zealous be to keep from drink away,
The evils which this alphabet has feebly tried to trace
No longer would on our loved land affix such dire disgrace. 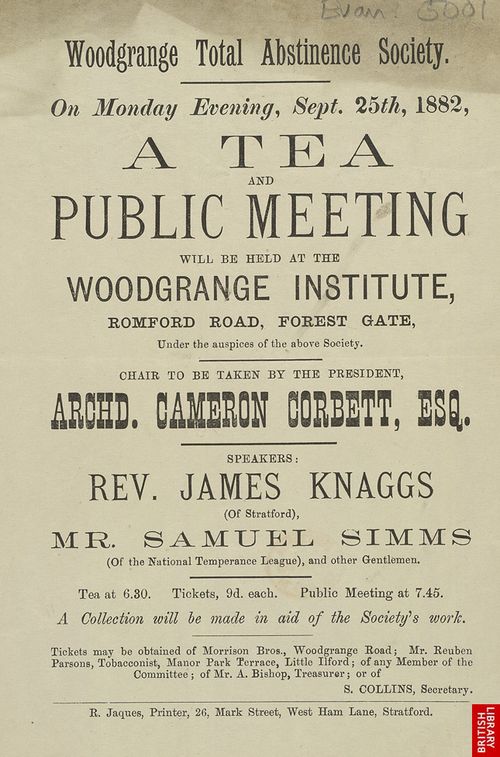 Posted by Margaret.Makepeace at 09:00:00 in Domestic life , Health , Propaganda