The author and actress Mary Robinson (1758-1800) became known as ‘Perdita’ following her appearances in that role in Shakespeare’s The Winter’s Tale at Drury Lane in 1779.  She was briefly the mistress of George, Prince of Wales (later George IV), a liaison which gave her lasting notoriety. ‘The Perdita’ (as newspapers routinely styled her) was one of London’s leading celebrities during the 1780s.  She was also a fashion icon, as newspaper reports of the time attest. 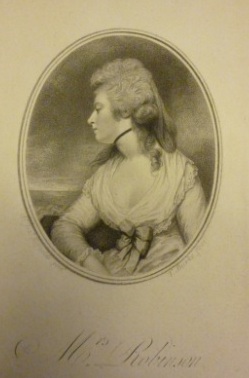 The Morning Herald and Daily Advertiser of 11 June 1781 recorded her ‘in a most becoming military attire (scarlet faced with apple green)’.  In the autumn of 1781, ‘Perdita’ went to Paris (the centre of the fashionable world) for the first time.  On 15 October 1782, the Morning Herald reported ‘The Perdita has received a dress from Paris, which was introduced this Autumn by the Queen of France’.  The same paper on 21 November 1782 identified it as the ‘Chemise de la Reine’, worn by Perdita to the opera.  The chemise de la reine was a flowing muslin gown without hoops, fastened with a silk sash, suitable for private and country wear – Marie Antoinette was portrayed wearing it by the painter Elisabeth Vigée-Lebrun in 1783.  Was this indeed the fashion in which Mrs Robinson appeared at the opera? Or was it, perhaps, closer to the ‘morning dress’ worn by the Queen of France at Versailles, as described in some detail in the Lady’s Magazine for April 1782:

The robe is made of plain sattin, chiefly white, worn without a hoop, round, and a long train.  It is drawn up in front, on one side, and fastened with tassels of silver, gold, or silk, … this discloses a puckered petticoat of gauze or sarsenet, of a different colour. …

Such a gown was surely more suitable for an appearance at one of London’s most elite entertainment venues.  The use of satin and the elaborate trimmings of this gown distinguish it from the chemise de la reine, except that the Lady’s Magazine also tells readers that ‘the dress, … it is said, will be worn throughout the summer, made of lighter material’ suggesting that it might have been an earlier version of Marie Antoinette’s informal dress.

Posted by Margaret.Makepeace at 08:15:00 in Arts and crafts , Domestic life , Georgians-revealed , Leisure