In 1787 the novelist Fanny Burney, then at court as Keeper of the Robes to Queen Charlotte, encountered another royal servant the caricaturist Henry Bunbury (1750-1811).  He had been appointed Groom of the Bedchamber to the Duke of York, second son of George III, in that year.  They met only from time to time, usually at the tea table, but although he was endlessly amusing she did not take to him.  She confided to her journal that ‘His serious manner is supercilious & haughty, & his easy conversation wants rectitude in its principles’.  Bunbury did not meet with the serious little novelist’s approval, although she could not help but enjoy his caricatures. 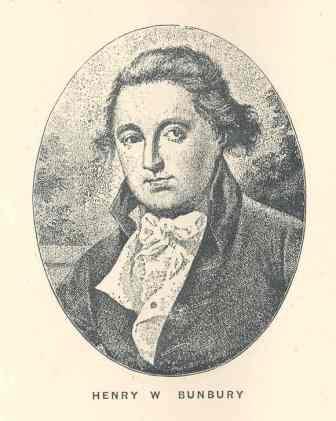 By the time he came to court, Henry Bunbury was well established as an amateur artist and, particularly, a caricaturist.  Following his grand tour in the late 1760s, Bunbury began to produce a continual flow of drawings and etchings.  He had studied drawing in Rome in 1770 and, after his return to London, he began to exhibit at the newly established Royal Academy of Arts.  In 1780 Bunbury was described by the art-lover Horace Walpole as ‘the second Hogarth’.  Walpole (son of Britain’s first prime minister, Sir Robert Walpole) had become an admirer of the artist from the very first exhibition of Bunbury’s works. 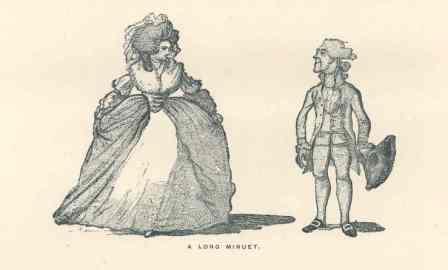 Bunbury’s drawings and engravings capture many aspects of Georgian life, from experiences on the grand tour to scenes from popular novels and from Shakespeare, caricatures of city businessmen and illustrations showing the comical accidents of horse-riders.  His most famous caricature is A Long Minuet as Danced at Bath, published in 1787 (Walpole quickly acquired a copy).  Bunbury obviously regarded it as important, for in 1789 he was portrayed by Sir Thomas Lawrence working on it.  He was one of a number of gentleman amateur artists who were creating works of social satire during the later 18th century.  Their status precluded them from images that were too pointed or too cruel.  Nevertheless, Bunbury’s work would later influence far more famous professional artists, including Thomas Rowlandson (1757-1827) and James Gillray (1756-1815), who had no such constraints.