Today we have a story about the Highland Clans of Scotland by guest blogger Jamie Rhodes who has been delving into the British Library’s 18th century Historical Papers.

The handling of Scottish rebellion was an important topic discussed amongst the British gentry in the mid-18th century.  The British Library archives contain two lengthy letters written between 1725 and 1748 from unknown gentlemen residing in Scotland.  Both propose that ‘civilising’ the Highland Clans is the solution to preventing further uprisings. 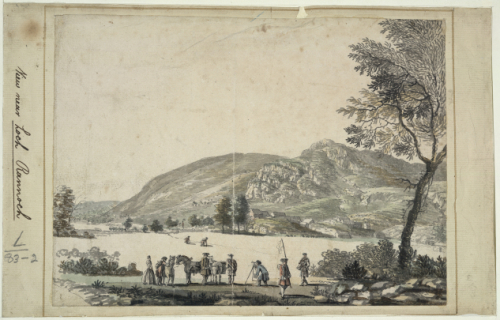 Surveying Party at the eastern end of Loch Rannoch as part of the Military Survey of northern Britain, 1749 (Maps.K.Top.50.83.2)

The earlier of these two letters was written circa 1725.  The author believes that because the Clans reside up to 50 miles from any magistrate to whose jurisdiction they are subject, the people are at the mercy of ‘oppressive Taskmasters’ who ‘cause them to commit the most excessive casualties and swear to the most abominable falsehoods without hesitation’.

The author describes how the Clans are being harnessed by the rebelling Jacobite Lords, before concluding in extravagant rhetoric that were the nation to embrace the Clans, to alleviate their poverty and ‘civilise’ them:
‘It would not only be freed from a Bloodsucking Bosom Enemy; But also have a great number of able hands joined to it…Jacobitism would receive the Deepest Wound that it has ever met with’.

The second letter written in 1748 from a gentleman in Edinburgh to his friend in London expresses the opinion that most of the Highlanders are peaceful people led astray.   He comments: ‘The common people live by hard labour, are poorly fed, and quite disused from arms so that it is no easy affair to oblige them to rise in rebellion’.  However, lack of knowledge of law and order makes them easily manipulated by rebelling lords. Two lords trying to raise a rebellion in Northeast Scotland went so far as to trick the common people into joining the rebellion:
‘When the Lords Pitsligo Ogilvy & Lewis Gordon were not able to force many of them to take up arms they beg’d of them to accompany them for a few days & they would ask no more of them, which to avoid great evils many of them did, but when they would have returned to their own houses they were given to understand that what they had already done render’d them as Obnoxious & Guilty in the eye of the Law as if they had been seven years in Rebellion, & that therefore they had no Mercy to expect or safety at home ’till they had destroyed the present government’.

When the Lords found that this trick had ceased to be effective, they obliged every tenant in their lands to provide at least one recruit or pay £6 (a huge sum for the common person at that time!).  Eventually, they even refused to accept the money and would insist on a man being supplied.


Further reading:
Some remarks on the Highland Clans, and methods proposed for civilizing them; written by one who, for some years, had had an opportunity of discovering the nature of the people, c 1725. (Add MS 22547)

The Highlands of Scotland described, with some observations concerning the late rebellion and Scotland in general. Also a scheme for civilizing the disaffected clans, and improving their country, in a letter from a gentleman at Edinburgh to his friend in London, c 1748-1750 (Kings MS 104)

Posted by Margaret.Makepeace at 08:45:00 in Conflict , Politics , Reform