Women of the Empire: a Privy Council case

The British Library’s collection of Privy Council cases 1861- 2007 is a fascinating and largely untapped mine of research material. The Privy Council was the final court of appeal for the peoples of the British Empire with their vastly diverse customs, traditions and experiences.  Full details of the cases are provided: records of proceedings, judgments of lower local courts, witness testimonies and attached exhibits. 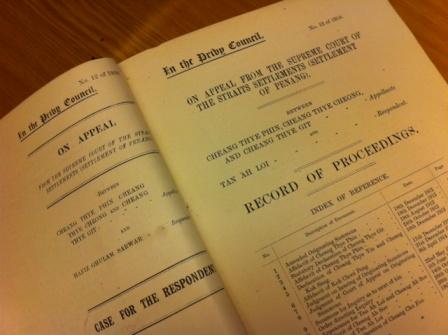 The case of Cheang Thye Phin v Tan Ah Loy  from the Straits Settlement in 1919  is a fascinating human study of gender politics and law.  It is also still regarded as “good law”, and is cited in current textbooks and courts of law.  The personalities in this fractious family and the full extent of the women’s suffering come alive, often through their own words.

Cheang Ah Kwi, a Chinese resident of Penang, died in 1901.  The case which started in 1912 revolved around the question whether Tan Ah Loy was one of his secondary wives (t’sips), or whether she is merely a concubine and so not entitled to anything from his estate.  Ah Loy claimed she was married to Cheang Ah Kwi in 1875 and there was much debate in the family about what a traditional or customary marriage ceremony entailed.  Cheang Ah Kwi had married his first wife (t’sai) in China and the sons of this marriage stood to gain most if Tan Ah Loy was discredited.  They described her as “a slave girl”, and their half-sister Ah Soo as “the daughter of a maidservant”.  The ‘recorder’ of the family duties and customs denied a marriage ever took place.

Tan Ah Loy stated simply:
“I was married to Cheang Ah Kwi when I was twenty two.  I was a virgin.  My hair was dressed.  I worshipped the joss, served tea to Teng Nyong and Kim Koo, Ah Kwi’s brother’s wife.  There were over ten guests.  There was a feast”.

Ah Soo described how her mother lived with the other wives and was deferred to properly.  However the Penang Registrar found against Tan Ah Loy describing her as “a kept woman” and a liar.

The case went to the Court of Appeal in Penang who found for Tan Ah Loy in August 1916, too late for Ah Soo who had died in February that year.  The appeal papers contain very detailed discussion about women’s roles at the time and criticise the earlier judgement.

Justice Ebden wrote:
“The evidence has the appearance of having been confused  by the free use of such words as ‘wife’, ’concubine’, ’marriage’, without explanation of the precise sense in which they are applied in each instance…… I write from some personal knowledge of the simple ways of the wealthiest Chinese households in the Malay State…..the story of the ‘slave’ or ‘servant girl’ is typical of the manner in which the family of the t’sai contests the family of the t’sip”.

Cheang Ah Kwi’s sons submitted an appeal to the Privy Council in 1918, but this was dismissed in 1919 and the Penang decision upheld.  Sadly Tan Ah Loy died in 1918, and so never knew that the law lords of the highest court in the Empire would “entirely agree that it has been proved in point of fact Tan Ah Loi was a secondary wife”.

Volumes from this collection can be requested from shelf mark PP1316 for use in the Social Science Reading Room. For guidance on ordering and further information see Privy Council Appeal Cases.

Posted by Margaret.Makepeace at 08:15:00 in Conflict , Domestic life , Journeys , Religion