Drawing the Line – the partition of India and Pakistan

Drawing The Line is a new play by dramatist Howard Brenton.  The line in question is the international boundary between India and Pakistan which was hurriedly drawn up in the summer of 1947, almost immediately prior to independence and partition on 15 August that year.  Major historical figures such as Gandhi, Mountbatten, Attlee, Jinnah and Nehru are all portrayed on stage as trying and failing to avoid the horrendous loss of life that ensued. 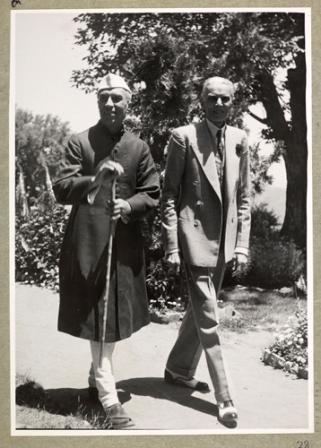 The play, however, chooses to concentrate on the plight of the hapless Cyril Radcliffe, the British civil servant handed the daunting and all but impossible job of working out the border on the map.  Neither a politician nor a cartographer, he had never visited India before in his life and only arrived in Delhi on 5 July, with a brief to complete his task by 7 August.

His private secretary - also a character in the play - was Oxford graduate Christopher Beaumont.  The British Library holds copies of letters he wrote home to his mother between January 1937 and August 1947.  Some of the material is typescript, but most is in Beaumont’s rather crabbed handwriting.  Two of the letters were composed while he was airborne when members of the Boundary Commission flew between various Indian cities as the deadline for British withdrawal approached. Beaumont is usually very guarded about commenting on the work of the Commission, although in a letter of 28 July 1947 he does go so far as to say:
“The actual job is difficult. Neither the Punjab nor Bengal was ever intended to be partitioned and it will not be possible to do it otherwise than by leaving nearly everyone with a grievance – more or less legitimate.  The position of the Sikhs in the Punjab will be particularly hard. Altogether a thankless task …”.

The letters are thus perhaps more useful in illustrating aspects of the daily life of a British official in the twilight of the Raj.  First going out to India at the age of 24, Beaumont has to get used to extremes of climate, to bouts of dysentery and prickly heat.  He frets about whether or not he will pass the language examinations he is required to sit; he relaxes with occasional rounds of golf and games of tennis and bridge, although sometimes bats interrupt his cooling midnight swims; and he gets to feel at home in the United Service Club in Simla (“It is limited in membership to the I.C.S. and Army so that the rabble is excluded …”).  Quite early on (26 July 1937) he writes that “Amritsar is about the most seditious town in India, & riots are endemic …”, seemingly without wondering why this should be so.

He is not above commenting waspishly on some of his colleagues, such as a judge – “a peculiar little man with a penchant for alcohol” – a police superintendent – “a taciturn fellow with little humour” – and a surgeon – “He started life as a clarinet player in Melbourne and saved enough money to take the medical exams.  He never speaks without prefacing his remarks with an oath.”  Beaumont did, however, come to like India, retaining generally fond memories of it until his death in 2002.

Further reading:
IOPP/Mss Eur Photo Eur 428 Photocopies of letters from Herbert Christopher Beaumont (born 1912), Indian Civil Service, Punjab 1936-44, Indian Political Service 1944-47, Private Secretary to Chairman of the Boundary Commissions (Sir Cyril Radcliffe) 1947, to his mother commenting on his life in India.
IOPP/Mss Eur R150 Tape recording of interview, given 1984, by Herbert Christopher Beaumont (b 1912), on his career in the Indian Civil Service, Punjab 1936-44 and in the Indian Political Service 1944-47.

Posted by Margaret.Makepeace at 09:00:00 in Conflict , Politics , Work