King George III’s education included languages (English, German and Latin), sciences (physics, chemistry and astronomy), history and mathematics.  He learnt about art and architecture, and he was taught several accomplishments.  Amongst these last, he learnt to dance, to fence, to ride, music (he played the harpsichord and the flute) and to draw.  His artistic education was varied.  The artist and architect Joshua Kirby (1716-1774) was appointed as his drawing master in 1756, while George was still Prince of Wales, and taught him perspectival drawing.

In 1761, not long after George succeeded his grandfather as King of Great Britain, Kirby published The Perspective of Architecture.  The large folio volume included ‘One Hundred Copper-Plates’ with a frontispiece designed by William Hogarth, and cost three guineas ‘in sheets’ (unbound).  It was a luxurious and expensive volume, dedicated to the King.  The elaborately calligraphy of the engraved dedication leaf proclaimed that the work was ‘begun by Your Majesty’s Command, carried on under your Eye, and now Published by Your Royal Munificence’.  More than that, it also included one plate for which the original had been drawn by George himself, although Kirby did not have the presumption to say so explicitly.

The original drawing in pencil, pen and ink and grey wash is now in the Royal Collection, described as a ‘Perspective drawing of a classical building with pavilion wings’.  An annotation by Kirby ascribes it to his royal pupil.

Kirby and his son William were made joint clerks of the works at  in 1761.  George III’s interest in architectural drawing, also fostered by his simultaneous study of architecture with Sir William Chambers, continued for many years.  It is evident in the King’s Library (where what must have been Kirby’s presentation copy is kept) and the King’s Topographical Collection, which contains many drawings as well as innumerable architectural prints.  Both collections provide ample testimony to the range and depth of the King’s artistic and cultural interests. 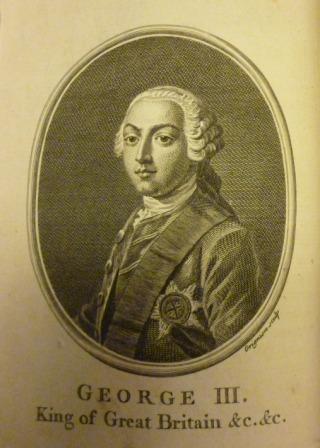