The Prince Regent became King George IV on 29 January 1820 and was crowned on 19 July the same year.  The coronation provided the occasion for a display of unparalleled magnificence – not least in the new monarch’s dress.  George IV was keen for further opportunities to display himself in royal state to his subjects.  In 1821 he visited both Ireland and Hanover.  In 1822 it was the turn of Scotland. 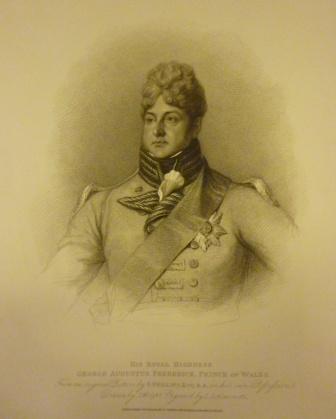 Portrait of George IV (when Prince of Wales) from The British Gallery of Contemporary Portraits. London, 1822.  (Tab.1249.a.)

The Scottish visit was recorded in some detail by Robert Mudie, at that time a reporter for the London newspaper the Morning Chronicle, in A Historical Account of His Majesty’s Visit to Scotland published soon afterwards.  Mudie provided a minutely detailed account, from the King’s journey to Greenwich to embark for his voyage to Edinburgh until his departure from the Scottish capital for his return by sea to London.

Apart from the ecstatic reception on his arrival in Edinburgh, one of the high points of the visit was the King’s levee held at the palace of Holyrood on 17 August 1822.  The Caledonian Mercury for 19 August provided a report, declaring:

On Saturday, his Majesty held his first levee in the Scottish metropolis, which was most splendidly attended, and we hear that the numbers exceeded those of any levee ever held in London.

There followed a lengthy list of those who ‘had the honour of being presented to his Majesty’.  According to Mudie ‘The King himself remarked at the close, that there must have passed him not less than 2000 persons’. 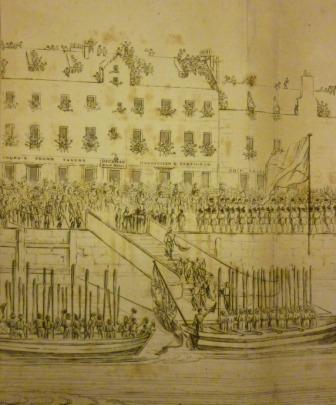 George IV took care to be appropriately attired.  According to the Caledonian Mercury ‘His Majesty was superbly dressed in the Highland costume, with trews of the Stuart tartan. … the manly and graceful figure of his Majesty was finely displayed in this martial dress’.  London’s Morning Post for 22 August added a few details - ‘his Majesty was dressed in a full Highland uniform, and wore the broad sword, pistols, and philebeg [a belted plaid]’.  The King was painted in his Highland dress some years later by Sir David Wilkie - the portrait is now in the Royal Collection.  Wilkie took care to emphasise George IV’s ‘manly and graceful figure’ and to depict the many rich jewels that formed part of the King’s exuberantly luxurious appearance.