Life in a Criminal Gang in India

The India Office Records contains a considerable quantity of files on the subject of crime and punishment in British India.  One recently catalogued file of papers gives a fascinating insight into life in a criminal gang.  It concerns Act XXIV of 1843 - An Act for the better prevention of the Crime of Dacoity.  Dacoity is an Indian term for robbery by an armed gang.  The papers include a 58 page narrative or confession by a 45 year old man named Lukha who had spent most of his adult life as a Dacoit in what was then the North Western Provinces. 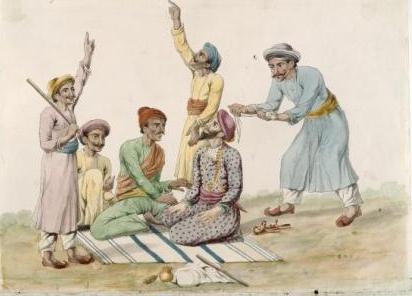 Lukha was Rajput of the Solanki clan, and became a member of the Budhuk dacoits.  At the start of his narrative he says that he had always followed the trade of his ancestors, that of dacoity and that he was involved in his first robbery at the age of 20.  Lukha’s three brothers were also dacoits.  Interestingly Lukha’s father, Saduleea, was a farmer who never took to dacoity, and as a teenager Lukha worked on the land with him.  However, Lukha fell out with his father, and moved to another village to live with his brother-in-law, Madeea Jemadar, a dacoit.  A leading dacoit named Man Singh lived in this village, and he persuaded Lukha to enter into a life of crime by asking why he would want to be a drudge at the plough when he could have a better life by joining them.

Lukha was impressed by Man Singh, who had twice been sentenced to transportation for armed robbery, and twice escaped, and soon embarked with his gang on a robbery in the city of Khairabad in Oudh.  The gang spent two months preparing and recruiting men until they were 30 strong.  They then attacked the house of a merchant of Khairabad, killing three men and stealing property to the value of 2,000 rupees.  Lukha’s narrative details some 49 robbing expeditions he participated in over the next 25 years.  The robberies were usually accompanied by great violence, with those who resisted the heavily armed gangs being commonly killed or wounded.

Lukha was arrested in 1840 near Moradabad on his way to visit some friends.  In a letter regarding Lukha’s arrest and confession, Major W H Sleeman, Superintendent for the suppression of Dacoity and Thagi, describes him as being disguised as “…a Byragee when brought in to me, covered with ashes and paint, and carrying a little house of peacock’s feathers on his back, and it was with difficulty that his nearest relation, who had long been with me recognised him”.  Major Sleeman’s enquiries confirmed that the robberies detailed in the confession had all taken place as described, although some had never been reported to the authorities.

Posted by Margaret.Makepeace at 9:29 AM