Scandal and bigamy in Georgian London

Elizabeth Chudleigh (c1720-1788) was among the more notorious celebrities of the Georgian period.  Her background was apparently privileged.  Her father, Colonel Thomas Chudleigh, was lieutenant-governor of Chelsea Hospital and the family were friendly with Sir Robert Walpole’s children.  He, of course, is known as Britain’s first prime minister.  In 1743, Elizabeth was appointed as maid of honour to Princess Augusta, mother of the future King George III.

Her status, however, was more questionable than it appeared.  By the time Elizabeth Chudleigh married the Honourable Augustus John Hervey (1724-1779), the son of that assiduous courtier Lord Hervey, in 1744 she had already had several liaisons.  She was not faithful to her new husband and the couple parted in 1749.  This was the year in which she became the centre of a scandal which was still remembered forty years later. As The Life and Memoirs of Elizabeth Chudleigh, published in 1788, put it:

… it has been asserted this lady appeared [at a masquerade] in a shape of flesh-coloured silk so nicely and closely fitted to her body as to produce a perfect review of the unadorned mother of mankind, and that this fair representative of frailty, … had contrived a method of giving as evident tokens of modesty, by binding her loins with a partial covering, or zone, of fig-leaves.

The Life and Memoirs included an engraving of her in costume, which agreed with this description by showing Elizabeth Chudleigh nearly naked. Her character was not Eve but Iphigenia, the daughter of Agamemnon sacrificed to ensure a fair wind to Troy. 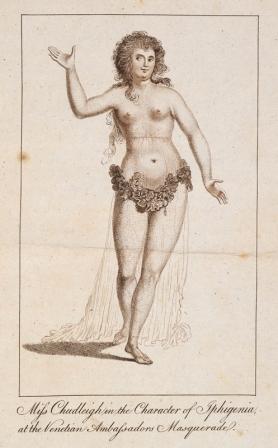 Miss Chudleigh in the Character of Iphigenia, at the Venetian Ambassadors Masquerade'  from Life and Memoirs   Images Online

Soon afterwards, she became the mistress of Evelyn Pierrepont, second Duke of Kingston (1712-1773).  In 1769, ‘Miss Chudleigh’ married him, having gained a legal ruling that her marriage to Augustus Hervey had not taken place.  All was fine until the Duke died and she was accused of bigamy by his nephew and heir.  The case quickly reached the press.  The June 1775 issue of The Matrimonial Magazine included a five-page article ‘Memoirs of the Married Maid of Honour; or, The Widow’d Wife’ with ‘an elegant Engraving’  containing portraits of her with both her ‘husbands’. It recounted details of her scandalous career, lingering over her love of luxury and her valuable collection of jewellery. 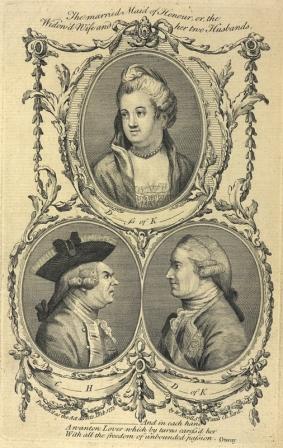 In 1776, the ‘Duchess of Kingston’ was tried in Westminster Hall for bigamy and found guilty.  She immediately left Britain and never returned.  When she died in 1788, in Paris, several accounts of her life were quickly published in London.  Elizabeth Chudleigh was most definitely a celebrity in the modern style.