The copies of burial records for Europeans in India held at the British Library contain a number of deaths resulting from unfortunate or unusual events.  As well as the thousands dying from disease, debility, and childbirth, there are men, women and children whose lives were ended by sudden catastrophe: hunting accidents, attacks by wild animals, snake bites, poisoning, explosions, earthquakes, and lightning strikes.

Accidents with firearms claimed many lives.  In October 1827 Lieutenant Thomas Lee Kennedy of the Bengal Army died whilst hunting elephants in Assam with Lieutenant Hamilton Vetch. Kennedy’s gun went off by accident, killing him almost immediately. A very detailed inventory was taken of his possessions at death. The last item listed is ‘A Double Barrel Gun’. 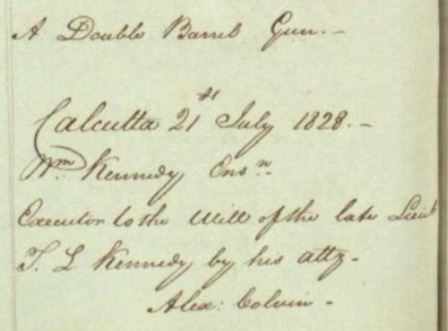 The animals of India were directly responsible for many deaths.

John McCarty, a Private in HM 67th Regiment, died from a dog bite at Meerut in July 1816.

Peter Fredhoff , second mate of the Woodman,  died from a shark bite whilst bathing in the sea near the ship in August 1840.

Nine year old Christopher Kyte, whose father was the jailor at Kumbakonam, was killed by a snake bite in July 1861. 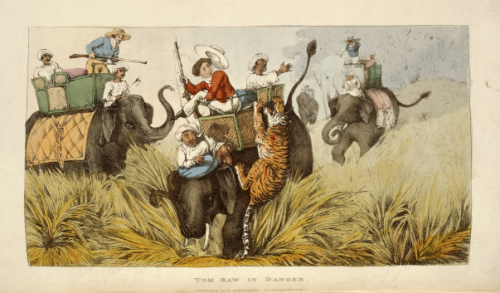 Bombay civil servant Herbert Alfred Hughes died on 31 March 1887 aged 24 and was buried the same day at Bhusaval. The cause of death in the burial register was given as ‘exhaustion from tiger mauling’.  Hughes died without making a will and a notice concerning the settlement of his estate appeared in the London Standard on 17 February 1888. 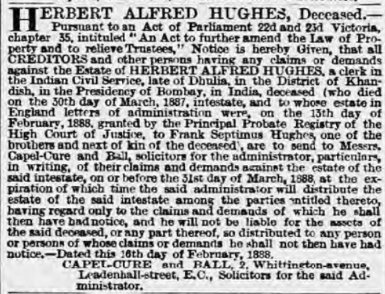 Poor George Richard Jermet Boyd died in August 1882 at the age of seventeen as a result of poisoning.  An explosion of gunpowder on board the country ship Eliza in March 1813 caused the deaths of George Silverlock, the 16 year old second officer and Richard Welsh, the first officer.  Silverlock and Welsh were buried side by side in the South Park Street Burial Ground in Calcutta.

Natural phenomena were another cause of death. For example, the Bengal burial returns contain hundreds of deaths caused by the Quetta earthquake of 1935.

Where the cause of death is not given in the burial register, other sources may provide the information.  Details of the death of George Cracroft Aubert on the evening of 29 April 1843 are given in The Bengal Obituary.  Aubert was riding home from a friend’s house when he was ‘overtaken by a sudden storm’ and he and his horse were both struck dead by lightning.

Executions of criminals by the East India Company are recorded. Andrew Bisset, alias William Harris, was buried in Calcutta on 27 April 1772 after execution for piracy and murder. Soldiers John Callingham, Joseph Goodridge, Joseph McCrumb, Hugh Jones and Patrick McQuid were buried at Fort William on 10 December 1810 having been executed together in the Loll Bazaar for murder.

To see the burial records and inventory mentioned in this story and to search for other untold lives online visit the British in India Collection.

The newspaper articles can be accessed online via the British Newspaper Archive.

Posted by Margaret.Makepeace at 10:00:00 in Domestic life , Health , Journeys