On 10 February 1821 an advertisement appeared in the Caledonian Mercury which points to a dispute among Edinburgh’s dancing masters.  ‘Mr Strathy, Teacher of Dancing’ describes himself as ‘Successor to the late Mr Ritchie’ and offers lessons to Ritchie’s erstwhile pupils at the late dancing master’s premises in St James’s Square, Edinburgh as well as at his own rooms in South Hanover Street. Ritchie had died as recently as 4 February 1821. The Caledonian Mercury for 15 February 1821 carries an advertisement by ‘Mrs Ritchie, Widow of the late Mr. Wm. Ritchie’ asserting that her husband’s classes would be continued at St James’s Square by Messrs Dun.  They had been advertising classes in Edinburgh since at least 1812. Barclay Dun’s A Translation of Nine of the most Fashionable Quadrilles was published in Edinburgh in 1818. By September 1821, the Duns father and son were advertising their classes both in Hanover Street and St James’s Square so they must have established themselves as Ritchie’s successors. A Mr Dun is still advertising as late as 1839. 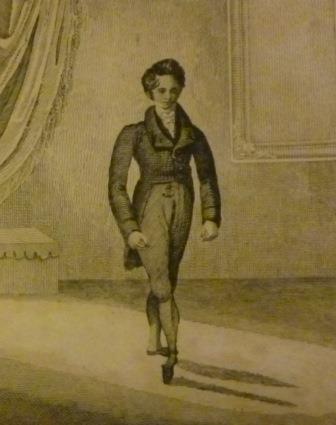 Plate from Alexander Strathy, Elements of the art of dancing. Edinburgh, 1822.

Strathy, on the other hand, apparently disappears from the newspapers until a new advertisement in the Caledonian Mercury of 24 September 1821. He tells ‘the Nobility and Gentry’ that he is ‘just arrived from Paris and London, where he has acquired an additional variety of Steps, tastefully arranged for the Quadrille’. He offers private teaching in Hanover Street and announces his forthcoming treatise. The Caledonian Mercury for 17 January 1822 advertised the publication of Alexander Strathy’s Elements of the Art of Dancing with illustrations at a price of ‘5s.6d. boards’. The copy in the British Library retains its original binding with printed boards and has two pretty plates– one showing a young lady and the other a young gentleman ready to dance. The Caledonian Mercury for 19 September 1822 announces that ‘Mr Strathy has resumed his Classes and Private Teaching’, but there seem to be no subsequent advertisements by which to chart his later career.

Alexander’s Strathy’s treatise provides surprising insights into social dancing technique in early 19th century Britain. The steps and exercises he describes are very close to those still practised in ballet classes today. Young dancers of the early 1800s were obviously expected to take their dancing seriously.

Barclay Dun, A Translation of Nine of the most Fashionable Quadrilles. Edinburgh, 1818.

Alexander Strathy, Elements of the art of dancing. Edinburgh, 1822.

Posted by Margaret.Makepeace at 09:00:00 in Arts and crafts , Conflict , Georgians-revealed , Leisure , Work