On the morning of Sunday 8 February 1914, John Gordon Lorimer, the officiating British Resident in the Persian Gulf at Bushire, retired to his dressing room to ascertain the exact calibre of his automatic pistol as he wished to order cartridges from Bombay. He was later found lying on the floor, dead, at the age of 43, from a self-inflicted gunshot wound.

According to a press communiqué reported in the Times of India newspaper, Lorimer, in examining his pistol, ‘had pulled the trigger and discharged a last cartridge which had been overlooked in the magazine’. The bullet entered his stomach, passing through the body, rupturing major blood vessels. Shock, in the opinion of the Residency Surgeon, ‘must have caused immediate loss of consciousness… and death speedily followed’.

Four days later, the SS Barala delivered news of the death to the Major Arthur Prescott Trevor, the British Agent at Bahrain. In his diary, he records that ‘[t]he sudden and tragic news shocked everyone’. The Agency’s flag 'was hoisted at half-mast' and the office was closed 'as a mark of respect to the deceased' the following day. ‘Great sympathy was shown by all’ and Bahrain merchants and notables, including members of the Indian, Persian and Jewish communities, attended the Agency to express their condolences. The news reached the ruler of Bahrain, Shaikh ‘Isa bin ‘Ali Al Khalifah, who was residing at Muharraq. He ordered the lowering of flags at his residence and the Customs House. His son, Shaikh ‘Abdullah, proceeded to Manama to offer condolences, while Shaikh ‘Isa called in person some days later. 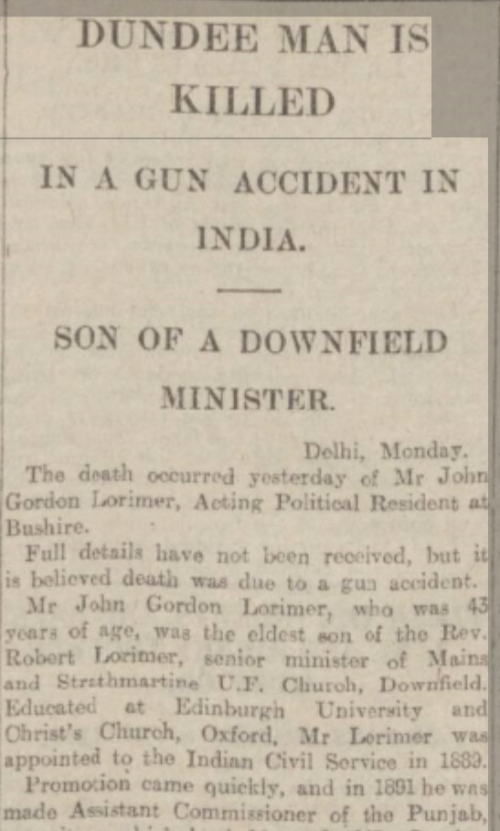 The event was reported as a ‘Persian Gulf Tragedy’. Newspapers in Britain and India mentioned Lorimer’s education at Edinburgh and Oxford and extolled his accomplishments in the Indian Civil Service. He was eulogised as ‘one of the ablest officers of the Foreign Office’ and having ‘scores of friends in official circles’.

One detail is conspicuously absent from these tributes, namely his monumental Gazetteer of the Persian Gulf, Oman and Central Arabia: an encyclopaedic two volume work of colonial intelligence surveying the history and geography of the region. Although obituaries make mention of his other publications - Customary Law of the Main Tribes in the Peshawar District (1899) and Grammar and Vocabulary of Waziri Pashto (1902) - it is the Gazetteer for which Lorimer is best-known today.

The reason for this absence is that the Gazetteer was a top secret document, only available for official use, until it was declassified in 1955 under the 50-year rule. Only allusions could be made to this work, for example: ‘He some years ago acquired a special knowledge of the Persian Gulf’ which was ‘of the greatest value to the Government whom he served’. Although a facsimile edition and Arabic translation were published in the early 1970s, the Gazetteer – often simply referred to as ‘Lorimer’ by researchers of the Gulf – has remained relatively inaccessible due to its voluminous size and high price. However, now, through the partnership between the British Library and the Qatar Foundation, the Gazetteer will be digitised, text-searchable and available for free online along with other India Office Records relating to the Persian Gulf.

John Gordon Lorimer, Gazetteer of the Persian Gulf, Oman and Central Arabia (1908 and 1915)