The age of the train - British Railways ephemera

Much has been written about the history of rail travel and British Railways in particular, with transport-dedicated bookshops still existing when conventional booksellers have gone out of business.  After nationalisation of the lines in 1948, rail was promoted in various ways and, fortunately, British Railways made sure that the resulting ephemera were deposited with the British Museum (as the British Library was until 1974).  The leaflets generally thrown away by the public were preserved here at the Library (shelfmark WP14515) and they reveal how society has changed in terms of mobility, demographics, and family life. 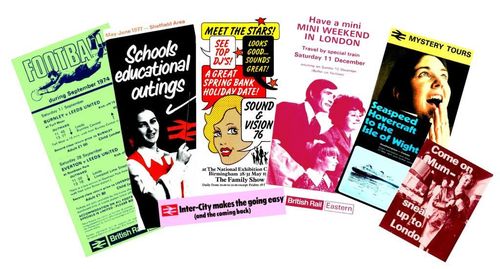 The BR pamphlets started out in the 1950s as a way to convey basic information.  Timetables aside, they were a means to announce technical improvements such as electrification, which would of course derail the age of steam trains.  By the 1960s, the Government-run system started to describe itself as more than a practicality of life, re-inventing the service as one offering possibilities to anyone with the correct fare.

There were a variety of ways that the united rail service promoted itself, appealing to both the single and the married, the holidaymakers and shoppers, the football fans keen to follow their teams in person, and those who could be induced by bargain fares.  Group outings were encouraged, school trips for the children and conferences for adults.

Although mystery tours are nowadays often themed as outings-on-foot, to see architecture or ‘ghosts’, or organised by niche holiday companies, modern railways seem to have abandoned the pitch.  But there was a time when people paid for rail journeys not quite knowing where they’d be going!

Occasionally, BR printed non-trendy leaflets, such as a self-congratulatory one announcing the very first automatic level crossing barriers (1961), and an apology for “teething troubles” with the new diesel service (1960).  And the company needed staff and so in the early 1960s printed leaflets such as Girls, Look Ahead and There’s a Job Here for You!

It’s easy to be fooled by old prices.  Travelling from Leeds to Burnley for a football match cost just £1 return in 1974, but that special price would be about £18 today.  A return journey from Newcastle-Sunderland to London was only £16 back in 1981, which translates to £126 today.

And for particular schedules, the Library has retained many, from branch lines to major routes.  As British Railways reminded the public, This is the age of the train.

Posted by Margaret.Makepeace at 09:00:00 in Domestic life , Journeys , Leisure