The Beauties of the Male Leg

The young French dancer Auguste Vestris made his London debut on 16 December 1780 at the King’s Theatre in the Haymarket (the capital’s opera house). He immediately drew audience attention through his combination of dance virtuosity, youth and good looks. The Morning Chronicle for 19 December 1780 tried to describe his talents:

It is impossible for words to convey an adequate idea of the strength, grace, and agility of this wonderful performer. … His entrechats were lofty and neat beyond imagination, and his balance appeared almost the effect of enchantment. Both in the serious and comic dances his attitudes were perfect models of elegance and picturesque expression. 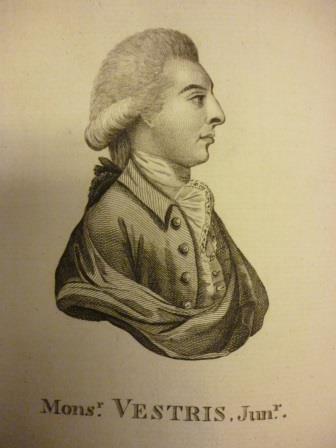 Some months later, a pamphlet entitled An Heroic Epistle, from Mons. Vestris, Sen:  was published in London. Ostensibly written by his famous father Gaetan Vestris (but probably by the classical scholar John Nott), it was as much concerned with Vestris Junior’s  sex-appeal as his dancing prowess. After disparaging the home-grown dancers and dismissing other local entertainments, the writer turns to the new sensation whom he calls a ‘young Adonis’. The poem details the young man’s effect on the women in his audiences. Ogling the beautiful youth, one ‘hot matron’ exclaims  ‘Then what firm legs, and what delicious thighs!’. 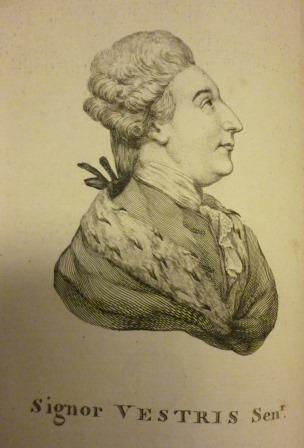 Vestris Senior (then the leading dancer at the Paris Opera) did not appear at the King’s Theatre until 22 February 1781, when he and his son danced leading roles in the ballet Ninette à la Cour.  The performance was a benefit for Vestris Junior and drew vast crowds of would-be spectators. The London Courant and Westminster Chronicle for 23 February 1781 marvelled that ‘The passion for seeing a Frenchman dance, has thrown the town into a kind of delirium’. The opera house had been ‘literally besieged at five o’clock’ by people wanting tickets.  According to St James’s Chronicle or the British Evening Post for 17-20 February 1781 the benefit was even mentioned during a debate in the House of Commons. So many members wished to attend that Parliament took a recess. On the night the theatre was so full that, inevitably, there was a disturbance when the curtain rose. Nevertheless the concluding ballet with its French stars was a great success. Auguste Vestris was said to have made £1000 from the performance. For the moment at least, he became London’s leading celebrity.