We return to the theme of unfortunate deaths in India with the following story which appeared in many British provincial newspapers in October 1887 having originally been published in the Lahore Tribune. The Reading Mercury cast some doubt on the veracity of the tale, saying it was ‘very strange if true’.

‘The son of a well-known Londoner went to India last summer to make his home with an uncle who had grown rich in the Orient.  Some time ago the family received a letter from the uncle to say that his nephew was dead, and that his body had been sent home in a sailing-ship.  The vessel duly arrived, and a peculiarly-shaped box was delivered to the relatives.  The undertaker examined this case, and the coffin contained a Bengal tiger.  Upon this the surprised father at once cabled to his brother in India:- “Some mistake.  George’s body not arrived.  Coffin contained Bengal tiger”. He replied – “No mistake. George inside tiger”.' 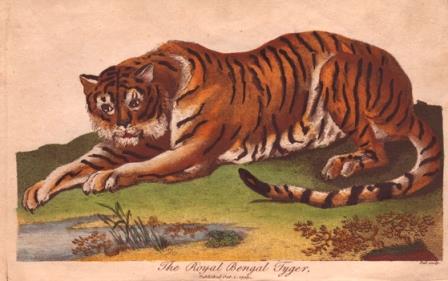 'The Royal Bengal Tyger' © Florilegius / The British Library Board