Wills are a wonderful resource for researching individuals and families.   They can reveal places of residence and birth, occupations, family relationships, friendship groups, property, and personal possessions.  Dark secrets concealed for many years may come to light through an urge to resolve matters once and for all at death.

A large collection of wills and estate papers for British India has recently been put online by find my past. Spanning a 250- year period, they include wills written by civil, military and maritime employees of the East India Company and India Office, as well as private individuals such as merchants and planters, and women. 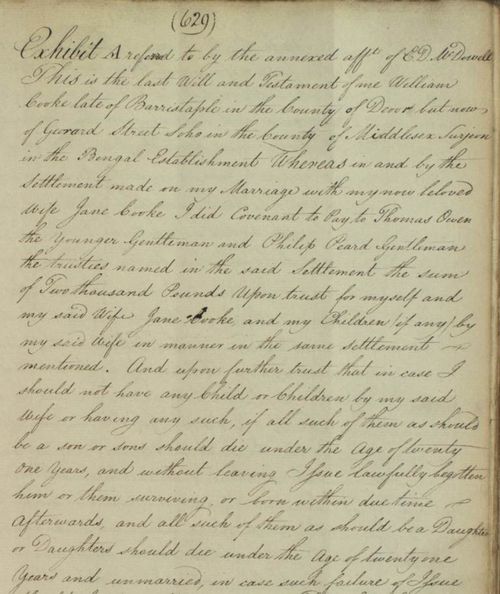 One of the wills which has been digitised is that of Vestris Junr.a surgeon on the East India Company’s Bengal establishment.  The document reveals a great deal about Cooke and his family, and provides many clues for further research.  When he wrote the will on 24 March 1808, Cooke was living in London at Gerrard Street Soho, but he formerly lived in Barnstaple Devon. There are details of the marriage settlement made for the benefit of his wife Jane and any children they might have together. Cooke made arrangements for a pension to be paid for the maintenance of Bebee Nancy of Monghier in the East Indies.  Bebee Nancy is described as nurse to Cooke’s ‘reputed natural son’ Charles Cooke, otherwise known as William Henry Cooke.  Cooke also made provision for three other natural children ‘begot in India’: Eliza Douglas Cooke, Henry Cooke (now in Bengal), and Susan Cooke. Other family members in England are mentioned, including Cooke’s sister Susan who was married to Philip Peard, an attorney at law residing at Ely Place, London.  At the time of making his will, William Cooke was about to sail to Bengal with his daughters Eliza and Susan on board the Sovereign, Captain Alexander Campbell.

A codicil made at Cawnpore on 18 August 1809 makes specific bequests of a number of William Cooke’s personal possessions. His wearing apparel, jewels, trinkets and ornaments, books and a piano forte were to be shared by his daughters Eliza and Susan.  His son Charles was to receive a fowling piece, a silver gilt snuff box, and a pair of sleeve buttons. His son in England, William Owen Cooke, was to have the seal which was a gift from the Nawab of Oudh, a small cornelian ring, and a mourning ring of his dead parents.

By the time Cooke wrote a second codicil on 2 April 1813, his son Henry was dead, and both daughters had married. Eliza was the wife of John McDowell a Captain in the East India Company Artillery, and Susan was now called Chadwick.  Probate of the will was granted to Eliza in November 1815 after William Cooke died in India.

There are many leads to follow up: William’s marriage to Jane; the baptisms of the children in India and England; the voyage to India; Henry and William’s deaths; Eliza and Susan’s marriages.  So where there is a will, there often is a way to make progress with your family history research!

Bear’s grease, bonnets, bellows, biscuits and Bibles – an inventory of a Simla merchant’s possessions at death

Posted by Margaret.Makepeace at 11:59:00 in Domestic life , Journeys

Posted by Margaret.Makepeace at 11:59 AM