A little wine for thy stomach's sake?

In a meeting that took place in Gombroon (Bandar Abbas) on 3 May 1729, a letter was read from the President and Council of the East India Company factory at Bombay.  This letter contains, along with the usual business of the Company, a complaint that a shipment of wine from Shiraz in Persia was ‘…so sour that they could never drink any quantity…’.  This led to the need for visits to the ‘Dutch punch house’ to buy liquor for the consumption of the Bombay Factory.  The letter goes on to admit that much of the wine has actually gone missing, though no one can say for sure whether it was given to a local official, Seyyed Ahmad Khan and his men, or whether it was distilled by the Bombay garrison and ‘expended in drams’.  The latter may be possible as there was apparently no arak left for them.  The fact that this shipment of wine mentioned comprised of 800 flasks, it can only be wondered how it all could have gone missing.  When the wine was sent from Persia it was considered to only be for the ‘immediate need’ of the Bombay factory, with a promise of a further, greater supply later. 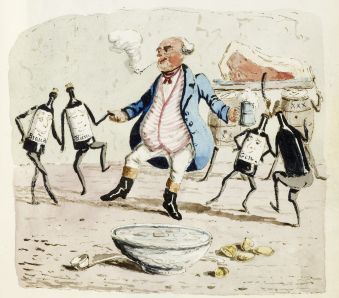 The records that these events have been drawn from are littered with references of alcohol of various sorts, whether fine wine and brandy from Shiraz or arak from India.  Alcohol was consumed often and in quantity, representing a huge expense on the Company, who seem to have been obliged to provide their employees with a regular tipple.  What makes this all the more interesting is that in 1728 the Company had made it completely illegal to gamble on their premises, viewing it as a sin and a vice.  They saw no issue in maintaining a wine house in Shiraz where they continued to buy and store wine in quantity despite a civil war tearing Persia in pieces and the threat of Ottoman invasion.  However, what is probably most interesting is that Muslim Persia was the major distributor of wine and that neither the Shi’a Persians nor the Sunni Afghans Turks were interested in stopping this lucrative business.

Posted by Margaret.Makepeace at 09:00:00 in Commerce , Journeys , Religion , Work